Nation prepared to deal with any threat: AJK president

Nation prepared to deal with any threat: AJK president

Urges youth to focus on modern educat­ion based on latest scient­ific and techno­logica­l trends­
By Mamir
Published: December 4, 2018
Tweet Email 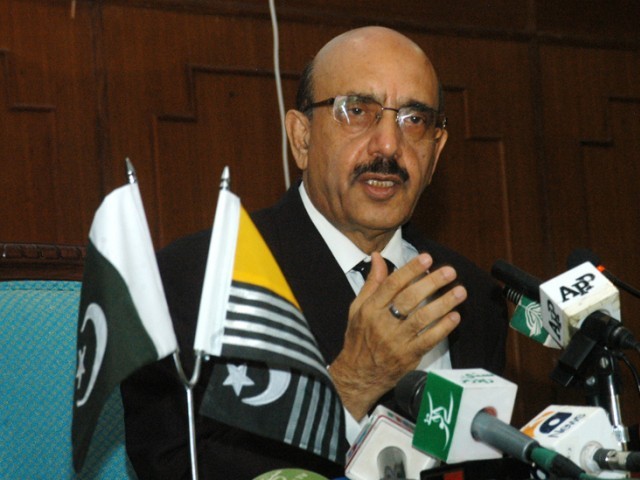 BATRASI: Azad Jammu and Kashmir (AJK) President Sardar Masood Khan on Monday said Pakistan is facing many challenges and threats at both external and internal fronts but nation has the capability to deter any kind of aggression to safeguard sovereignty of the country and other vital interests.

“Pakistan is facing serious challenges on the domestic and external front but nation is united and armed forces of the country are fully prepared to deal with any threat, President Masood said while speaking as chief guest at 14th annual parent’s day of Pakistan Scouts Cadet College at Batrasi located in district Mansehra.

The parents’ day ceremony was also addressed by Principal of the college Brigadier (retd) Abdul Hafiz Khan, and attended by top civil and military officials, members of the faculty and staff, large number of students of the college and their parents.

On his arrival, the AJK president was presented a guard of honour by smartly turned contingent of cadets. Speaking on the occasion, the president urged students to focus on modern education based on latest scientific and technological trends in order to meet challenges of the swiftly changing world.

“It is incumbent upon us to revive the spirit of national unity and follow the principles enshrined by father of the nation, Quaid-e- Azam so as to make Pakistan a strong and progressive and impregnable country,” he said.

Praising performance of the cadets in displaying high standard of skills in various fields, the president said he felt convinced that Pakistan Scouts College Batrasi as a premier residential institution of the country, rightly attained reputation both at national and international levels.

Directly addressing the students of the college, Masood Khan said, “You are being groomed in an environment that will elevate you to the highest level of profession and meet expectations of the nation when you will shoulder responsibilities of running affairs of the state in future.

“I am happy to know your college has been incessantly scaling heights of glory and living true to its motto “Excellence is standard not a goal”. The college, he said, has maintained the honour of producing excellent results both in Matric and F.Sc examination.

The president went on to say that the college was also greatly contributing to the nation by sending its students to other elite professional institutions, universities and armed forces academies of the country.

Recalling his meeting with a delegation of the college in China in 2011, when he was rendering his diplomatic responsibilities in Beijing, President Masood mentioned that Pakistan Scouts Cadet College Batrasi was the first institutions amongst the cadet colleges of the country, which has established Chinese language department and the cadets are sent to china every year to learn Chinese language in summer camps.

Referring to the ongoing freedom movement of Kashmir, AJK president said the people of Occupied Jammu and Kashmir struggling for their right to self-determination were subjected to worst kind of state sponsored terrorism by India.

“Being free citizen of the country, it is our duty to individually and collectively raise our voices for our oppressed and enslaved brothers and sisters,” asserted.

Constitutional rights to be extended to people of Gilgit-Baltistan