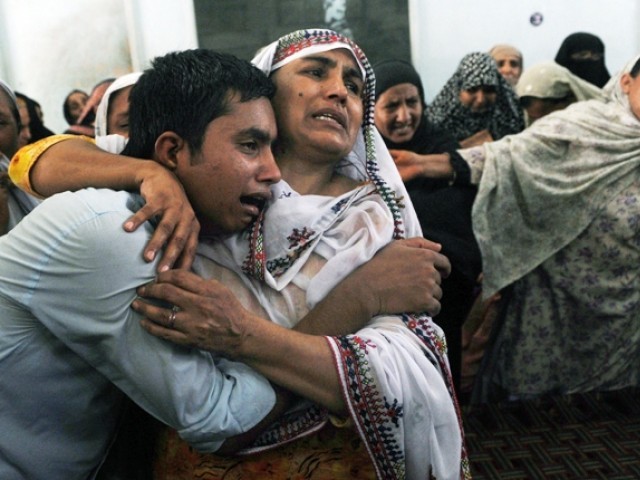 Relatives mourn shooting victim Sarfaraz Shah during his funeral in Karachi on June 9, 2011, after he was shot by Pakistani paramilitary soldiers. PHOTO: AFP

KARACHI: The mother of the youth shot dead by Rangers personnel said on Thursday that she holds Interior Minister Rehman Malik responsible for the killing of her son.

Manzoor Fatima, mother of deceased 19-year-old Sarfaraz Shah, said that she blamed the interior minister for her son’s brutal murder.

“Who has allowed the Rangers to open fire on citizens? Rehman Malik has given the shoot at sight order,” she said. She also urged the Supreme Court to take notice of the incident.

Malik said on Thursday that it should not be forgotten that the boy was a criminal. He added that Shah was trying to rob two women before the incident took place.

Shah’s family is from Bagh in Azad Kashmir. According to his mother, he had recently taken his matric exams and had hoped to pursue computer science. He was the fourth child, and has four brothers.

His friends and relatives claim that Shah had never stolen from anyone to their knowledge. They also said that if he needed money, Shah would have asked his family.

Shah was shot at point blank range in a public park in an incident filmed live and broadcast on television on Wednesday. Footage of the incident, filmed by an Awaaz TV cameraman, was broadcast repeatedly on local television stations.

In it, a Rangers official can be seen dragging the boy, then throwing him towards half a dozen armed comrades, one of whom then shot the 19-year-old twice at point-blank range as he begged for his life.

The five Rangers were subsequently arrested and taken to the Rangers headquarters and Jinnah Court in Karachi.

The Awaaz TV cameraman who videotaped the incident has received threats from unknown persons after footage of the incident was aired on Wednesday.  Sindh Information Minister Sharjeel Memon said those calls would be traced and the cameraman would be given adequate protection.

Earlier, a case had been filed at the Boat Basin police station by Afsar Khan against Shah for attempted robbery. The complainant claimed that Sarfraz attempted to rob him and his family.

Town Police Officer Tariq Dharajo has said that the case registered against Shah is void as the accused is dead.