Homelessness in Britain rises to one in 200 - charity

Homelessness in Britain rises to one in 200 - charity 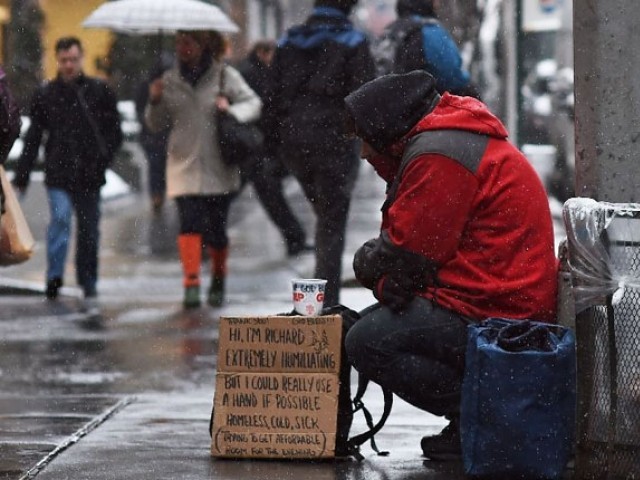 Homelessness has risen in England for more than six years with 80,000 families in temporary accommodation - PHOTO: AFP

LONDON: One in 200 people in Britain is now homeless, an increase of 4 per cent in less than a year despite government pledges to tackle the problem, the charity Shelter said on Thursday.

A Shelter report blamed the rise on high rents, cuts to welfare payments and a dearth of affordable housing and said the biggest increases were in major cities including London and Birmingham.

“It’s unforgivable that 320,000 people in Britain have been swept up by the housing crisis and now have no place to call home,” said Shelter Chief Executive Polly Neate.

“These new figures show that homelessness is having a devastating impact on the lives of people right across the country.”

Mosques in UK, Ireland turn into shelters for homeless as snowstorm thwarts region

They cover the period to the first quarter of 2018 and include those living in temporary accommodation, hostels or in social care – as well as rough sleepers.

Britain’s housing minister said the government was investing huge sums to tackle the causes of homelessness.

“No one should be left without a roof over their head,” said James Brokenshire in a statement.

“Our rough sleeping strategy, support for councils and those working on the front line are helping to get people off the street and into accommodation as we enter the colder winter months.”

Here’s what happens when a Muslim pretends to be homeless

Overall, homelessness has risen in England for more than six years, with 80,000 families in temporary accommodation including more than 120,000 children, government data shows.

To address the problem, the government has pledged to spend 9 billion pounds ($12 billion) on building affordable homes and has set an ambitious target of building 300,000 new homes a year by the mid-2020s.

Research by real estate group Knight Frank found the number of affordable homes built in England had risen by 12 per cent over the last year, with the strongest increase in London.