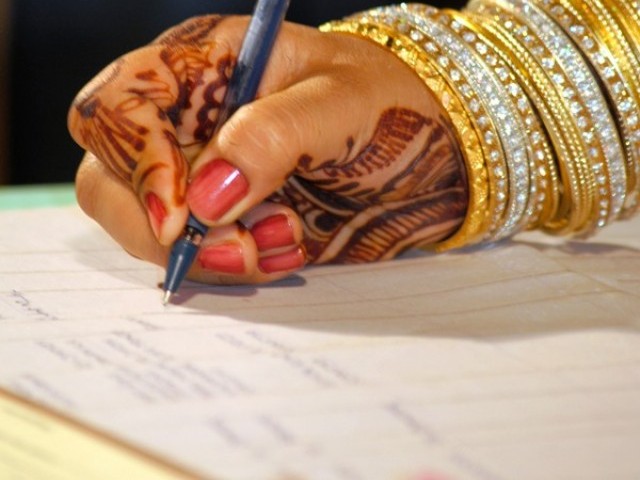 ISLAMABAD: The top court is adjudicating upon a bizarre case of Haripur wherein a mother is seeking the custody of her 18-year-old daughter, who married her stepfather.

A three-judge bench, headed by Justice Gulzar Ahmad, took up the case for hearing on Monday.

In the case, Sherbano – the alleged first wife of 25-year-old Waris Shah – filed a petition against the marriage of her husband with her daughter Sumaira.

Sherbano contended that her husband married her daughter without divorcing her, adding that she wanted the custody of her daughter in order to protect her from wrongdoings. Presently, Waris Shah is in jail but Sumaira is living in his house.

Justice Gulzar, while referring to the inquiry reports, told Sherbano that her daughter Sumaira was not doing anything wrong, adding that it would have adverse effects on other children if the custody of her daughter was granted to her.

K-P AAG Qureshi informed the bench that a trial court would decide the legal matter related to the validity of Shah’s marriage with his stepdaughter within a month.

Department Secretary Rubina Mahmood concluded in her report that the living condition of Waris’ father Wajid Ali Shah’s house seemed to be that of a middle-class family and a total of 12 persons lived in the house, including Waris and his family.

Before marrying Sherbano, Waris Shah had also once married a lady by the name of Kiran, the inquiry report suggested.

“I found that most of the people living in the vicinity of their house don’t want to talk about them,” said Mahmood.

The report added that Waris used to run his motorcycle and rickshaw spare parts business in Ada Darband in Haripur. It added that Shehrbano also ran a similar business and at some point mixed her business with Waris’. It stated that Waris used Sherbano for distributing their products and then became wholesalers, adding that during that period they got married, which was in 2015.

During the period, Waris changed the venue of their business to Girls College Road in Haripur.

It further stated that Sumaira, seemingly pressurised by her in-laws, abuses her mother Sherbano and favours Waris.

The inquiry report further stated that it appeared that “there is no sense of shame on the part of Wajid Ali Shah and Waris Ali Shah, Naseem Wajid and Sana Waris, the first wife of Waris Ali Shah, over the episode.”

According to another inquiry carried out by Superintendent of Darul Aman Chishti, Sherbano worked as a sales representative at an insurance company and also stitched clothes to earn a living while her maternal uncle Advocate Ayub Shah also supported the family.

She revealed that according to statements of villagers and neighbours, Sherbano was married to Abid Ali in 1997 in Karachi. Abid was in naval service and later worked at a towel factory in Karachi. After his death in 2009, Sherbano returned to her native village and since then was living there. It was revealed that since the lady was a working woman; therefore, she had limited engagements in society and social circle, the inquiry report stated.

The report added, “It was told that Sherbano married Waris Ali Shah in 2015 and migrated to Shah Muhammad Village. It was confirmed by the villagers that Abid (late) was a thorough gentleman and held unblemished character. Similarly, there is no evidence that Sherbano is a characterless woman.”

The superintendent, who is also the inquiry officer, after the inquiry stated in her findings that there was a serious issue between Waris and Sherbano over the alleged marriage of the former with the latter’s daughter Sumaira.

It is further stated that this matter was also brought into the knowledge of the elders of the village. Waris Shah and his father Wajid Shah were summoned to explain the position in front of a Jirga. Wajid admitted that his son had affairs with other women and that he was fed up of his son’s malicious character.

He advised the jirga to beat his son and throw him out of the village.

People told that while Waris was married to Sherbano, he had secret affairs with her daughter Sumaira and later fled with her. “For this reason, Waris is in jail,” the report stated.

After hearing the statements, Justice Gulzar further remarked that affairs of the house of Wajid Shah, the father-in-law of Sherbano, were running smoothly as per the reports.

K-P AAG Qureshi informed the bench that the case against Waris was pending before the trial court and the accused was in jail.

He further informed the court that 10 witnesses had recorded their statements in the trial court while statements of five witnesses were to be recorded.

He informed the bench that the matter would be decided in the trial court within a month. The bench adjourned the hearing of the case for two months.