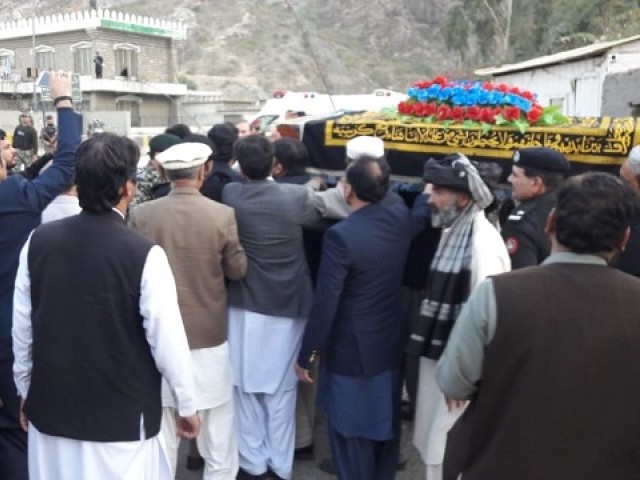 Afghan authorities on Thursday handed over the body of martyred Superintendent Police Tahir Khan Dawar to government officials at the Torkham border crossing.

State Minister for Interior Shehryar Afridi, MNA Mohsin Dawar and Shaukutallah Yousufzai were present at Torkham to receive the body. 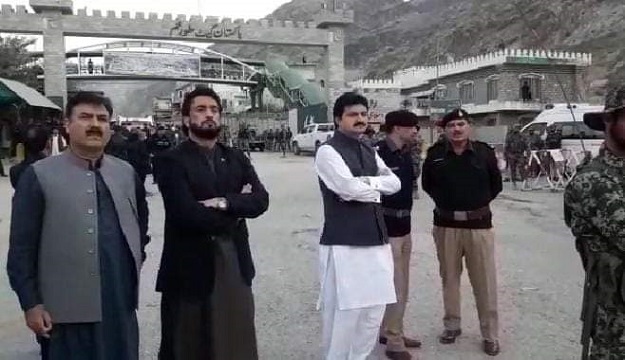 In a tweet, the premier tasked State Minister for Interior Shehryar Afridi to oversee the inquiry and ordered the Khyber-Pakhtunkhwa government to coordinate with Islamabad police in the inquiry.

Have followed the shocking tragedy of the murder of SP Tahir Khan Dawar & ordered KP govt to coordinate with Islamabad police in holding an inquiry immediately. MOS Interior Shahryar Afridi has been tasked to oversee it with an urgency & present the report to me.

Pakistan also demanded from the Afghan authorities to conduct an immediate investigation into Dawar’s martyrdom, whose body was found in Nangarhar province.

“The service card of SP Dawar was found along with the body,” the Afghan Ministry of Foreign Affairs told the Foreign Office on Wednesday, confirming it was him.

State Minister for Interior Shehryar Afridi addressed the incident during the Senate session and said those responsible for the act will be taken to task.

He urged the Upper House to initiate an inquiry into the Safe City project under which the previous government had installed 1,800 cameras in Islamabad. The minister added that 600 of the installed cameras are non-functional and do not possess the ability to identify a vehicle’s registration plate or an individual’s face.

SP Dawar was abducted by unidentified persons from the F-10 area of Islamabad on October 26 while he was taking a walk. It is said that at the time of abduction he was not carrying his service pistol nor had any security.

According to the Foreign Office, the Afghan ministry informed the Pakistan consulate in Kabul that locals of Dur Baba district of Nangarhar province in Afghanistan found the body, which had a service card on it.

The body has been handed over to the Pakistan consulate in Jalalabad and after completion of paperwork, the body would be brought to Pakistan via the Torkham border.

After his abduction on October 28, a case was lodged with the Islamabad Ramna police station and an investigation team was formed to find the missing SP. It was led by two federal police SPs.

The team was unable to find any workable clue till Tuesday morning, but on the same evening pictures of Dawar being killed in Afghanistan went viral on social media. However, the high-ups did not confirm the news.

The only lead the investigation team had was SP Dawar’s last location from where he was abducted – in front of F-10, Islamabad.

Islamabad police conducted many raids at different localities but all in vain.

Due to SP Dawar’s operation against militants in Bannu, he had received his share of death threats.

On Wednesday, FO spokesperson said that Afghan Ministry of Foreign Affairs confirmed finding the body of SP Dawar.
Dr Muhammad Faisal said, “SP Dawar’s body was found by the locals of Dur Baba district in Nangarhar province of Afghanistan. The Afghan ministry has informed the Pakistan Consulate about the body.”

The spokesperson said, “The service card of Dawar was also found on the body.”

The Khyber-Pakhtunkhwa (K-P) authorities have been waiting since Tuesday for the body of SP Dawar to arrive.
Afghan envoy to Pakistan Omar Zakhilwal told reporters in Peshawar that he was not aware of the police official’s killing nor had the Pakistani government contacted him in this regard.

“I know about the media reports like all of you but it is worrisome that an officer is kidnapped from Islamabad and then his body is found in Nangarhar, Afghanistan,” he said.

Reports from Afghanistan reaching the tribal areas suggested that IS militants tortured and killed SP Dawar.

He was also injured in encounters with TTP militants in Bannu and served in the United Nations twice.