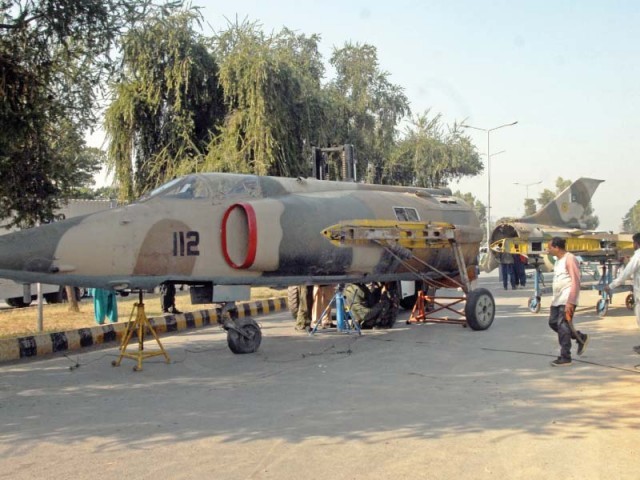 A fighter jet A5 C being put on display at 9th Avenue in Islamabad. PHOTO: ZAFAR ASLAM/EXPRESS

ISLAMABAD: An old fighter aircraft moving around on the streets of the capital caught the public attention on Thursday afternoon as rumours were rife that another protest was being staged by religious parties at the Faizabad interchange.

The decommissioned, supersonic Nanchang A-5C ground-attack aircraft was wheeled around the streets of the capital before it reached its resting position on Ninth Avenue in Sector I-9. It is expected to be installed on the corner of Seventh Avenue in Sector I-9 where pillars have been erected for the purpose. As the plane was installed, motorists driving by slowed down to catch a glimpse of the new roadside attraction. This caused a mini-traffic jam on the avenue.

The single-engine plane, which carries serial numbers 3W-112 on its tail, served in the Pakistan Air Force (PAF).

The PAF had acquired a special variant of the aircraft – known as A-5C with western avionics and ejector seats apart from under-wing pylons which supported the short-range air-to-air missiles AIM-9 Sidewinder and the R550 Magic — in the 1980s.

The PAF had operated three separate squadrons of the close support aircraft but the last of these squadrons were retired in 2011.

The intersections in the federal capital usually sport greenbelts with only a few bearing monuments such as the World Chowk on Constitution Avenue and the Ghauri missile on Nazimuddin Road on the confluence of Sector F-10 and Sector G-10.

By comparison, neighbouring Rawalpindi boasts a host of interesting roundabout installations such as cars, eagles and horses.