More than 300 shops and 7,000 signbo­ards and sunsha­des taken down in anti-encroa­chment drive
By Our Correspondent
Published: November 9, 2018
Tweet Email 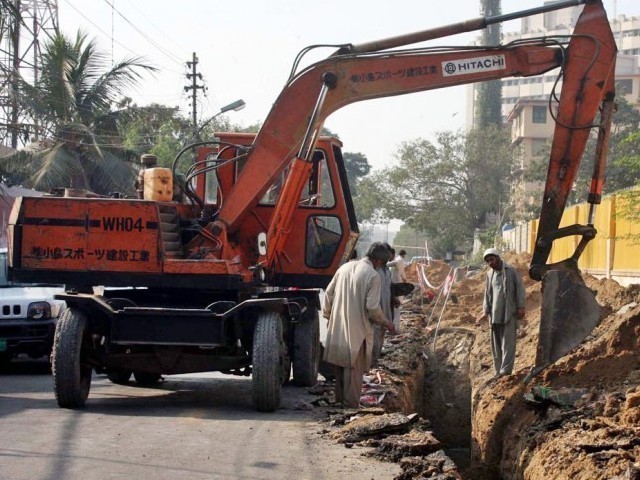 KARACHI: Mayor Wasim Akhtar on Thursday announced to provide alternative space to the tenants of the markets surrounding Empress Market in Saddar, in other markets of the Karachi Metropolitan Corporation (KMC).

The move came in response to the protest by the shopkeepers as KMC continued to demolish its own markets in Saddar, on the directives of Supreme Court (SC) to revive the Empress Market to its original shape. Akhtar assured to form a committee under the Karachi commissioner. “The committee will negotiate with these tenants,” he said. The KMC is also pulling down signboards protruding outside the shops in Saddar area besides other structures and encroachments on footpaths.

A three-member bench of SC, headed by Chief Justice of Pakistan Mian Saqib Nisar, had ordered to clear the Empress Market and its adjoining areas of all encroachments, including Saddar’s footpaths in the first phase.

However, the real target of the anti-encroachment operation are the markets surrounding the Empress Market rented out by KMC’s estate department, but have to be demolished in line with the SC’s order.

Adjacent to the Empress Market there is Umer Farooqi, Shahabuddin market and a pet market all of which are to be demolished, as per KMC’s plan. On Wednesday, the authority made a bid to demolish Umer Farooqi market, but ended up pulling down only a few rooms constructed at the rooftop of the market. Following this, severe law and order situation broke out and the shopkeepers staged a sit-in outside the market.

Several illegal hawkers in the area also staged a sit-in after erecting tents in Saddar on Thursday. The shopkeepers of the KMC’s market claimed to have been operating their businesses legally after paying rent to the KMC. “Our motive is to demolish shops which were rented in past,” said Akhtar adding that the sit-in is illegal and they have the support of the Rangers and the police.

The operation of removing signboards and other installations from footpaths continued on Thursday in Zainab Market, Mobile Market, Regal Market and Aurangzeb Market. The operation is expected to restart today (Friday) after Zuhr prayers.

In the on-going operation, Pakistan Tehreek-e-Insaf’s (PTI) MPA Khurram Sher Zaman’s restaurant was also partially demolished. Talking to The Express Tribune, Zaman said that the signboard of his restaurant was protruding by only 24 inches outside the shop area. The authority, he said, was unaware of what sized signboards protruding outside were legal and which were illegal. “Be it four inches outside or 20 feet, they’re destroying them all,” he said and asked the KMC to come up with a size, which they consider illegal.

Addressing a press conference, Zaman said that there’s been a war like situation in Saddar for the past two days. “Apart from encroachments, concrete shops are also being demolished,” he said asking that encroachment be removed from parks, footpaths and other government owned lands not legal shops.

Operation clean-up: Drive suspended amid resistance by shopkeepers in Karachi

On the other hand

Meanwhile, according to KMC Anti-encroachment Senior Director Bashir Ahmed Siddiqui, more than 300 shops in Saddar have been demolished in the four-day operation and more than 7,000 signboards and sunshades have also been taken down.

A week before the operation, he said, they had placed banners in the area warning the shopkeepers and encroachers of the upcoming operation.

With the consent of Katchi Memon Masjid’s committee in Saddar, Siddiqui said, they demolished five illegal shops from the footpaths.