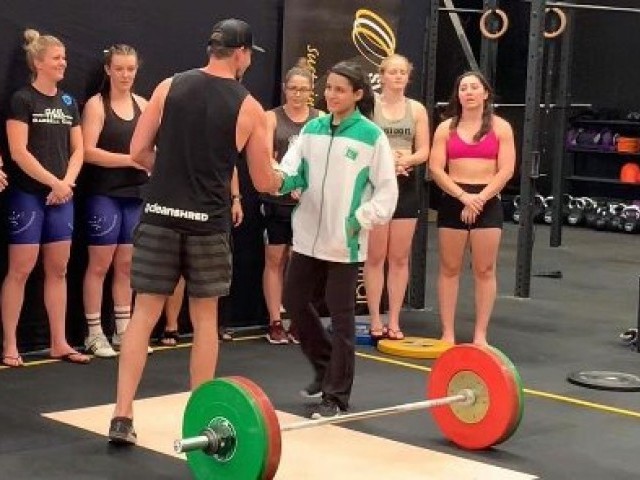 KARACHI  : After being written off by the national weightlifting federation, Rabia Shahzad knew there was only one way to respond, and that was to win a tournament.

The 20-year-old proved her point in style as she won her gold medal at the Ralph Cashman Weightlifting Championship in Sydney, Australia.

“I just kept training in my dining room, because there are no gyms in Karachi that offer women’s weightlifting training,” Rabia told The Express Tribune from Australia.

“All I want is to be able to compete, to get the platform for it, but unfortunately it was not available for me, so I opted for this tournament, in a hurry. It was a very tough competition, all the weightlifters  were Australian, and I was the only one from outside, but it was a great experience.”

She was a contender in the 55kg category, where she lifted 40kg in snatch and 50 in clean and jerk to win the gold medal. The event was organised by South Wales Weightlifting Association.

Rabia had been hoping to compete at the Asian Power-lifting Championship in Mongolia, but the Pakistan Weightlifting Federation was less than co-operative.

However, she registered herself with the Australian Weightlifting Federation, who made it easy for her to compete.

“I was a bit disappointed that people of my own country wouldn’t support me, but the Australians did,” said Rabia. “Here the federation officials tried to stop me. We called the Pakistan weightlifting federation several times, but they wouldn’t even pick our calls, I just want to compete, to keep going as a weightlifter, it is not easy, but they just wouldn’t give me a chance. So I found motivation anyway, I came to Australia.”

Rabia said that she keeps up with her training regardless of competitions and her goal is to be in form and ready to take on the challenges as an athlete.

“I train on my own, even when I was requesting to represent Pakistan at the Asian Power-lifting event, I was sure that I can afford it on my own, we never asked for anything else. For this championship too, I prepared on my own,” said Rabia.

She added that she is aware of her limitations as well, as she does not have a coach, but she is learning and improving each day.

‘It usually happens, the pressure during the competition sometimes get to me, so I have to improve on that, I lift more weight during the training and off the event and during the breaks too, but the pressure is real, so I fight through it,” said Rabia.

Her aim is to be qualify for the 2024 Olympics, but she also understands the challenge it can be.

“OI want to participate in the Olympics and 2024 is my target,” said Rabia. “It is a challenge, I know I can’t do it on my own, but I want to try, I want to be there, I may not be able to win a medal their, but to just qualify for it is my dream. Winning an Olympic medals requires a lot more than just one person’s effort.”

Rabia has previously represented Pakistan at the 2016 Singapore Powerlifting Championship where she won two gold medals in juniors’ and open 44kg category.

Earlier this year she got a gold medal in Asian Bench press Championship in Dubai too.

Rabia is determined to make her mark in the sport, aided by her father Mohammad Shahzad, who has always supported her.

She said that the idea of competing at Ralph Cashman Championship  came from the fact that her father was competing at the Pan Pacific masters Games indoor rowing event.

Like his daughter, Shahzad also won a medal in rowing, albeit a bronze in the 2000metre M55-59 category on November 7.

Rabia saw an opportunity in Ralph Cashman Championship and availed it. She has made her point.

Starc, Lyon out of Australia’s T20 squad for India series