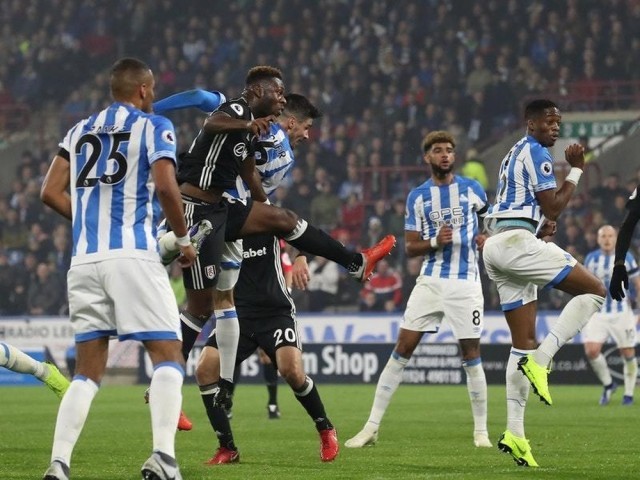 HUDDERSFIELD: Timothy Fosu-Mensah’s first-half own goal gave Huddersfield a 1-0 home win against Fulham and their first Premier League victory of the season on Monday.

Fosu-Mensah headed into his own net, under pressure from Town’s Christopher Schindler as Huddersfield halted an eight-game home run without a top-flight goal and moved above Fulham and Cardiff at the foot of the table.

The Terriers’ winless league run stretched back to April — 14 league games in total — but manager David Wagner was able to celebrate on the night of his third anniversary in charge with a morale-boosting victory.

Fulham’s fifth successive league defeat did little to ease the pressure on boss Slavisa Jokanovic, whose side’s own run without a league win was extended to eight matches.

“I don’t care who scored it or how we performed,” said Wagner. “People know we can perform better. The pressure was on for both teams but how we fought — we left everything on the grass. It was deserved. First half we were clear and second half we were able to keep them away from our goal. This is huge for us. We have the winning feeling back. For sure it is one of the most important wins we’ve had in the last three years. Everybody needed this belief back. It’s massive for us.”

Steve Mounie headed Aaron Mooy’s cross tamely over soon after and Alex Pritchard’s brilliant effort from outside the area was expertly clawed away by Fulham goalkeeper Sergio Rico.

But Huddersfield’s agonising wait for a goal at home was finally over in the 29th minute, making it 659 minutes in total.