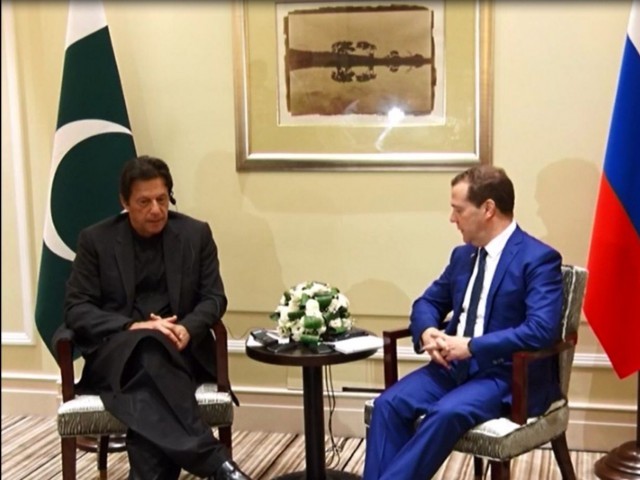 The meeting was also attended by Finance Minister Asad Umer and Advisor to the PM on Commerce Abdul Razzak Dawood.

Earlier in the day, the premier addressed the opening ceremony of the CIIE as chief guest. In his speech, he stressed that Pakistan will be made a more conducive and competitive market for businesses and investments.

In Pakistan the Karakoram Highway merges into a network of modern highways that are part of the China-Pakistan Economic Corridor. These take you to the deep sea port of Gwadar, the point where the Belt and Road converge. @ImranKhanPTI #PMIKatCIIE pic.twitter.com/Y0nfe5wlJZ

The prime minister also emphasised that while unilateral commercialism was aggressively sought and with protectionism on the rise, Pakistan took great comfort in Chinese President Xi Jinping’s affirmation that Beijing’s doors for Islamabad will only open wider and never shut.

After the opening ceremony, PM Imran along with Umer, Foreign Minister Shah Mehmood Qureshi, Federal Minister for Planning, Development and Reforms Khusro Bakhtiar and other members of his delegation visited Pakistan’s stall at the expo as the “Country of Honour”.

Pakistan to be made conducive, competitive for businesses and investments: PM Imran

Prime Minister Imran Khan welcomed the Chinese President and the world leaders at the Pavilion.
Pakistan has set up Pavilion as Country of Honour.@ImranKhanPTI #PMIKatCIIE pic.twitter.com/XITe828zgZ