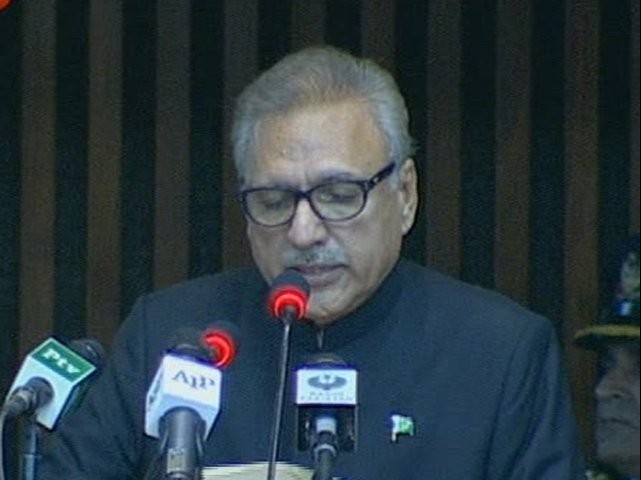 KARACHI: Paying tribute to the armed forces and martyrs who helped the country attain peace, President Dr Arif Alvi has said Pakistan has been saved from terrorism, which has deeply hurt other Muslim countries like Libya, Syria, Afghanistan and Yemen.

“Pakistan has been saved and I am proud of the nation,” Dr Alvi said while speaking at the launching ceremony of 16th My Karachi – Oasis of Harmony Exhibition 2019 to be held next year in Karachi.

Talking about his recent visit to Turkey, Alvi said that Ankara holds Pakistan in high regard but the trade between the two countries has reduced from $1 billion to $600 million and the warm feelings between the two nations have not been translating into economic goals.

He said despite seven meetings for a Free Trade Agreement (FTA), progress has not been made as Turkey wants to protect its textile sector, which has kept it from striking a deal.

“Turkey President Tayyip Erdogan has, however, told his finance minister ‘enough is enough’ and has asked him to find a way to increase bilateral trade with Pakistan,” he added.

He said his Albanian counterpart also asked him to invest in Albania so that Pakistan could have access to European markets through Albania, where Pakistan exports will be re-exported in Europe after value addition.

Alvi said Pakistan has immense potential for tourism, adding that the number of tourists has increased from 5,000 to 2.5 million in the last five years without any marketing.

The president said ‘wealth accumulation’ was not bad if state plays its role by creating equal opportunity to both rich and poor children giving them access to education. However, he said, one cannot expect to be secure while only securing his own houses.

“The onus of responsibility is on the elites to give the poor equal opportunity in order not to have our underprivileged segment marginalised and frustrated,” he added.

Talking with reference to development projects in Karachi, Alvi said the government has been working on Lyari Expressway and would extend it from a two-lane way to a four-lane or perhaps even a six-lane road for transportation of heavy traffic.

“The Lyari Expressway needs to be bolstered at a few places to make it usable by heavy traffic and the government has been working on it,” he said. Alvi also felicitated businessmen for hosting ‘My Karachi’ event since 2016 and helping in promoting positive image of Karachi and Pakistan to the world.

Earlier, the Karachi Chamber of Commerce and Industry (KCCI) President Junaid Ismail Makda said if Karachi’s heavy traffic woes are resolved, the country’s exports could increase by 20% to 25%.

Makda said the city has been highly deprived as it contributes 52% to the national exchequer while it contributes 95% to the Sindh Revenue Board (SRB) while the rest of Sindh contributes only 5%.

“However, what Karachi receives in (the government’s development funds) is only 5%, which has led to a sense of deprivation in the city,” Makda said.