Residents of North Nazimabad are in for another traffic mess

Residents of North Nazimabad are in for another traffic mess 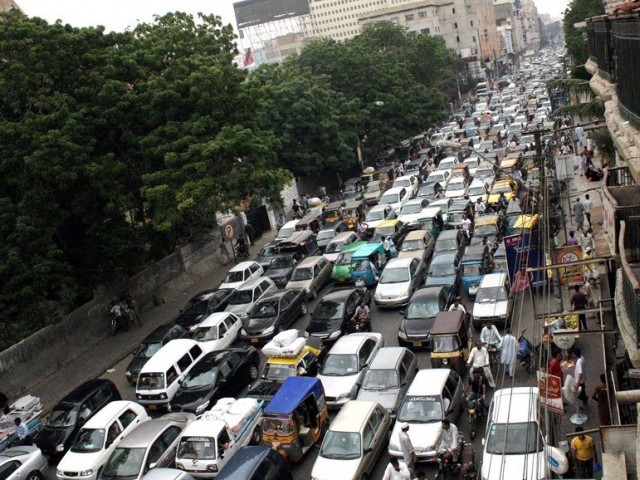 KARACHI: The residents of District Central may not breathe a sigh of relief even after the construction of the dedicated road for Green Line Bus in a passage of more than two years. The federal government has now initiated construction of three more flyovers at three intersections in North Nazimabad on Sher Shah Suri Road.

Sher Shah Suri Road starts from Abdullah Morr in Surjani Town all the way till Lasbela. After the construction of the new flyovers at Sakhi Hassan Chowrangi, Five Star Chowrangi and KDA Chowrangi on both sides of elevated road for Green Line Bus, a 15-kilometre (km) signal-free corridor will be formed. However, there won’t be any flyover at the Power House Chowrangi, where traffic often remains choked during rush hours.

According to experts, it is because of the ill-planning of the federal, provincial and local governments that the public would face a bout of traffic nuisance for another six months. Had the flyovers been constructed alongside the construction of Green Line BRT, public nuisance could have been drastically minimised.  The construction work for the Green Line BRT started in early 2016, which made the life of the residents of North Nazimabad miserable.

Earlier, three flyovers were constructed at the median for the segregated movement of Green Line Bus. At these same intersections, six-separate three-lane flyovers are being constructed for uninterrupted flow of traffic. “These will be separate structures from the Green Line flyovers,” said KIDCL Karachi Package Technical Manager Abdul Shakoor, adding that maximum traffic is observed on Sher Shah Suri Road, while there’s less traffic for left and right movement.

When asked about a flyover at the Power House Chowrangi, Shakoor responded that it wasn’t in their scope. Regarding the utility relocation, he said that it had already been done for the construction of Green Line BRT. The Sakhi Hassan flyover, according to him, would be 1.37km along with its ramps while the ones on Five Star and KDA will be 1.241km and 1.35km respectively, along with their ramps.

According to NED University of Engineering and Technology department of architecture and planning’s Prof Dr Noman Ahmed, who is also a board member of KIDCL, there is a big coordination gap between the three tiers of government; federal, provincial and local.

“There was a delay in the decision’s interface,” he said and explained that every government looks after their objectives. Had all the stakeholders agreed to one decision at a time, public nuisance could have been minimised. Regarding the proposed construction of Red Line BRT, he said that the newly constructed University Road will be affected. “The mandate of KIDCL was the construction work of Green Line,” he said adding that traffic management was the responsibility of Sindh government.

Shakoor said that the Green Line was conceived four years back, while the Karachi package was announced in 2017, under which these flyovers are being constructed.

Channelisation of traffic under flyovers

An official, on the condition of anonymity, told The Express Tribune that if traffic was not properly channelised under the flyover through traffic signals, there won’t be any use of constructing these flyovers. “When the traffic moves straight in the direction of the flyover, conflict movement occurs,” the official explained and added that this was the cause of traffic clog. “The same happens at Water Pump and Ayesha Manzil flyovers.”

Public buses, rickshaws and motorcycles, according to the official, usually don’t use the flyovers and cause traffic jams under them. In order to avoid this, a proper channelisation of traffic needs to be made by installing traffic signals and barring the movement of traffic at grade in the direction of the flyovers.