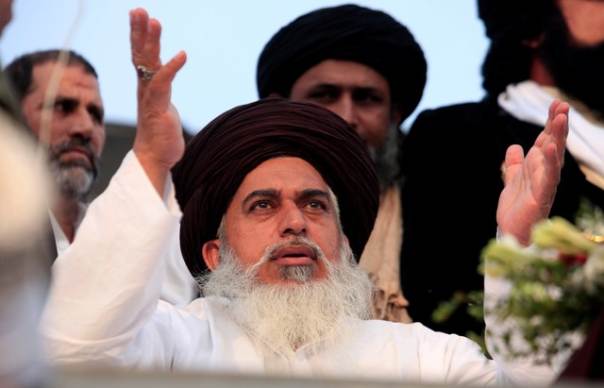 LAHORE: The Tehreek-e-Labbaik Pakistan (TLP) called of its countrywide protest sit-ins late Friday night following reaching of an agreement with the federal and Punjab governments.

On October 30, nationwide protests erupted against the acquittal of blasphemy accused Aasia Masih, aka Aasia Bibi, by the Supreme Court of Pakistan.

“I am thankful to all Muslims who have played their part to ensure respect for Prophet Muhammad (PBUH),” said TLP chief Khadim Hussain Rizvi while urging his followers to disperse peacefully.

“You have made an example and lesson for our generations to come about what it means to respect the Holy Prophet (PBUH),” he added

The five-point agreement says that a review petition against the Supreme Court judgment has already been filed which is a constitutional right of the complainants – and the government would have no objection to it. 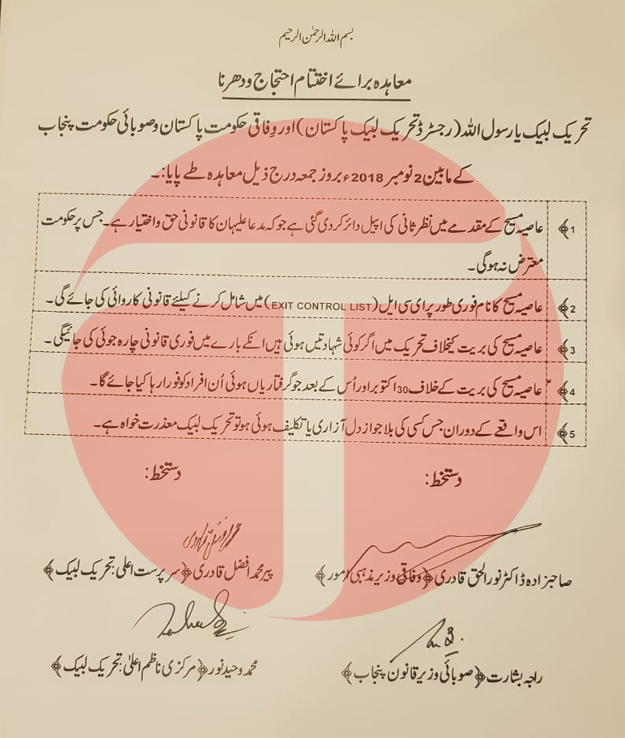 According to the deal, the government would take steps to immediately place the name of Aasia Bibi on the Exit Control List (ECL) till the adjudication of the review petition.

The agreement also reads that legal action would be taken if any TLP worker was killed during the dharna against the acquittal of Aasia Masih.

Similarly, the government has agreed to release all protesters taken into custody on October 30 and afterwards.

The Tehree-e-Labbaik Pakistan, on its part, has apologised for inconvenience or trouble caused to anyone during the protest sit-in.

The TLP took to the street after the acquittal of Aasia Bibi by the Supreme Court on October 30, paralysing the major cities of the country. In his immediate reaction, Prime Minister Imran Khan had warned the protesters not to incite people to violence or else the state would perform its duty to protect the life and property of its citizens.

The TLP protesters stayed put disregarding the warning and staged new protests after Friday prayers, bringing the life to a standstill.

Country at a standstill as protests continue

All private and public educational institutions remained closed in major cities, while attendance in government offices and commercial enterprises was also thin.

Hospitals also suffered from staff shortages. Many neighbourhoods in Karachi remained without water as protesters had stopped water tankers at different locations.

On Wednesday, the apex court acquitted Aasia Bibi – a Christian woman accused of blasphemy in 2010 and sentenced to death – and set aside an earlier judgment passed by the Lahore High Court.

The 51-year-old woman had been on the death row since November 2010 after she was convicted of committing blasphemy during an argument with two Muslim women at a village in the Sheikhupura district of Punjab.

Life comes to a standstill in Lahore