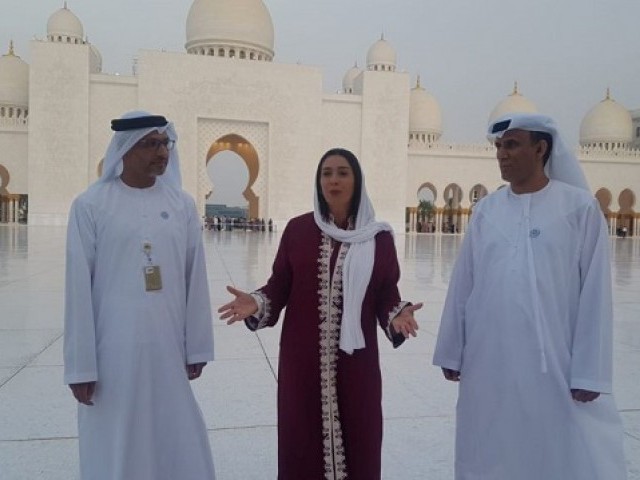 JERUSALEM: An Israeli cabinet minister’s visit to Abu Dhabi’s grand mosque gave more momentum on Monday to Israel’s diplomatic push in the Gulf, where it sees Arab states as its natural allies against regional powerhouse Iran.

“I am happy that I was privileged to be the first senior official from Israel to sign the mosque’s guest book,” Sports Minister Miri Regev wrote on Facebook about the tour which she said took place on Sunday.

On Sunday, Regev, in the United Arab Emirates for a judo tournament, fought back tears after Israel’s team won gold in the Abu Dhabi Grand Slam – a feat which allowed the Israeli national anthem to be played in a country that does not formally recognise it.

Would not negotiate secretly with Israel, says Fawad after reports of ‘Israeli’ aircraft in Pakistan

Her attendance at the event and the judo win were portrayed in Israel as both diplomatic and sporting achievements in a region where prospective allies have been reluctant to lift the veil on what Israeli officials have said have been years of covert contacts.

Israel’s Communications Minister Ayoob Kara was due in Dubai on Monday to attend the International Telecommunication Union (ITU), a United Nations agency.

Shining a rare spotlight on direct ties with Gulf states, Prime Minister Benjamin Netanyahu, announced on Friday he had just returned from a surprise visit to Oman, the first time an Israeli leader has visited the Sultanate in 22 years.

Netanyahu has on several occasions hinted at warmer relations with Gulf states.

He told Israel’s parliament last week that due to fears of a nuclear threat from Iran, “Israel and other Arab countries are closer than they ever were before.”

Israel has diplomatic relations with only two Arab states, neighboring Egypt and Jordan.

Netanyahu’s intensified outreach in the Gulf comes amid heightened speculation in Israel that he could call an early election ahead of polls due no later than November 2019.

Any normalisation of relations with Arab states in the Gulf could be a political boost at home, where he has also portrayed tighter ties as a way forward to a broad peace after direct peace talks with the Palestinians that collapsed in 2014.

On Facebook, Regev posted a video that showed her standing inside Sheikh Zayed Grand Mosque next to a man who appeared to be Mohamed Bin Thaloob al-Dera, president of the UAE Wrestling Judo & Kickboxing Federation, and another man whom she identified as a mosque official.

The UAE government media office said it could not immediately confirm the identities of the men shown in the tour of the mosque, named after Sheikh Zayed bin Sultan al-Nahyan, the UAE’s first president.

“The essence of the message in this mosque is one of brotherhood and peace,” Regev, a former chief Israeli military spokeswoman, said in the video, which showed her writing in Hebrew in the guest book.

K-P bans use of smartphones in public hospitals, medical facilities