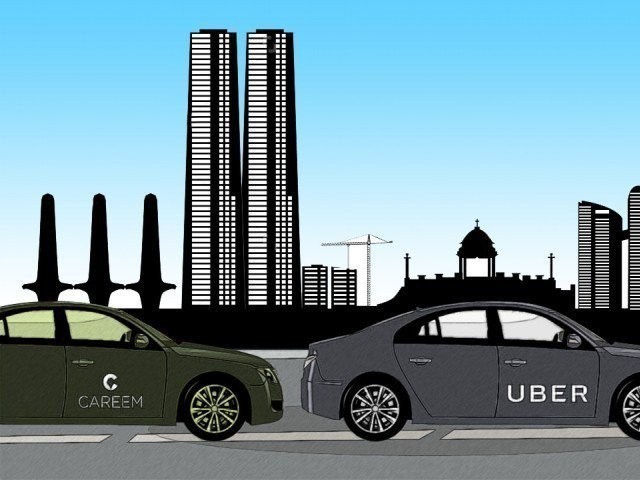 Animation of Careem and Uber

KARACHI: While ride-hailing services Careem and Uber seem to be doing good business in Pakistan, particularly Karachi, the companies seem to be unwilling to get their operations registered with the Sindh transport and excise and taxation departments.

Operating freely, the companies are meeting the needs of commuters in a transport-starved city for the last two years, but are yet to comply with the Motor Vehicles Ordinances (MVOs) in the province, despite repeated warnings by the Sindh government.

Uber signed an Memorandum of Understanding (MoU) with the Sindh government on August 25, 2016, according to Sindh Regional Transport Authority (RTA) Secretary Nazeer Hussain and failed to comply with the clauses of the memorandum. As far as Careem is concerned, Hussain said the company hasn’t signed any agreement or memorandum with the Sindh government; hence Careem’s operation is completely ‘illegal’.

In February 2017, then transport minister Nasir Hussain Shah warned to ban the two companies if they didn’t abide by the laws. The matter then went into cold-storage – due to backlash from the media and citizens against the Sindh government for making an attempt to ban a decent mode of transportation – until a petition was filed in the Sindh High Court (SHC) seeking direction to curb the “illegal operation” of Careem and Uber.

The petitioner, Ahsan Puri, alleged that the foreign-originated companies were conducting operations in Pakistan through the internet and mobile phone applications without proper registration. The companies, Puri claimed, were violating provisions of the Sindh Motor Vehicle Tax Act, 1958, the Motor Vehicle Rules, 1959, and the Motor Vehicle Ordinance, 1965, which specifically provide that no non-commercial vehicle could be used for commercial purposes.

In April 2017, SHC asked the provincial authorities and the ride-hailing services to come up with a mechanism to regularise their services. The court was later informed that the provincial transport department, Careem and Uber had reached an agreement, under which their vehicles would be registered for commercial use and permits issued under the Motor Vehicles Ordinance, 1965.

However, nothing happened and just this week, newly-appointed Transport Minister Owais Qadir Shah granted a week’s time to the ride-hailing services to regularise their operations, failing which the services would be banned in the province.

What needs to be registered?

Hussain explained that there are three documents, which the two ride-hailing companies need to obtain from three different departments to operate their vehicles commercially. But for their [companies] ease, he said, the Sindh government assured them of a one-window operation quite some time ago, but the companies have yet to avail the facility.

Firstly, he said, the two companies need to turn in documents of their cars to the RTA office and submit a challan to the excise and taxation department and obtain a fitness certificate from the Motor Vehicle Inspector (MVI) and then the RTA will issue them the route permit and a no-objection certificate to operate their vehicles commercially for three years.

He explained that all this can be done through the RTA department easily if the companies agree. “We don’t have any record of their cars plying on the city’s roads,” he said, asking who would be responsible if any untoward incident took place. In a meeting recently held at the transport secretary’s office, he said that it was decided that both companies would register 500 cars in the initial phase.

According to the MoU, singed between Uber and the Sindh transport department – a copy of which is available with The Express Tribune – the vehicles engaged by Uber shall be duly covered with route permits from the RTA, Karachi, as provided in the MVO ordinance. “The condition of route permits shall be applicable to every individual vehicle engaged by ‘Uber’ in the provision of its digital lead generation services,” the MoU reads.

The MoU further asked the vehicles engaged by Uber to be liable for payment of 10% additional motor vehicle tax to the Motor Registration Wing, Excise and Taxation Department for the purpose of acquiring non-commercial number plates in addition to the usual taxes.

Vehicles engaged by Uber are also liable to acquire vehicle fitness certificates, in accordance with Section 39 (1) and 40 (2) of the MVO, 1956. The minimum and maximum fares are to be defined by Uber, but those have to be justifiable in the interest of general commuters.

On June 19, 2017, Hussain said that their department also sought comments from the Sindh law department on whether it could withdraw the MoU and the response came in the affirmative. Several letters, he said, were then written to Uber, warning them of cancellation of the MoU, but nothing materialised. “Because Careem never signed any MoU with us, we never wrote to them,” he said and added that Careem’s operation already stands ‘illegal’ in the province.

However, correspondence from the provincial transport secretary dated January 20, 2017 was sent to the provincial information science and technology secretary and to the Pakistan Telecommunication Authority director in Karachi, who called for a complete shutdown of the Careem cab service.

Copies of the correspondence were sent to the Karachi traffic DIG, provincial transport authority chairperson and Careem with a directive to the latter to explain its position within three days of its receipt. In the process of registration, Hussain said that his office has been advised to also formally sign an MoU with Careem.

As for the operation of bikes, Hussain termed it as completely illegal as there’s no provision of commercial use of motorbikes in the MOV, neither is anything in this regard mentioned in the MoU signed by Uber. However, Hussain said that if the law is amended, there could be provisions for such services.

Both the companies’ communication offices were contacted for a comment, however Careem refused to comment on the issue while Uber did not respond to repeated calls and text messages.