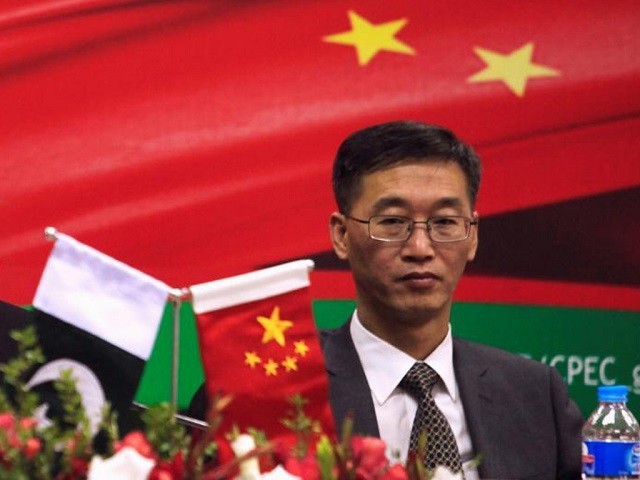 Ambassador Yao Jing says all projects are mutually beneficial and CPEC is the manifest of China’s trust in Pakistan. PHOTO: RADIO PAKISTAN

ISLAMABAD: Chinese Ambassador to Islamabad Yao Jing said on Friday his country would provide all possible assistance to help Pakistan meet the economic challenges, as both the nations are set to lay foundation for implementation of second phase of the China-Pakistan Economic Corridor (CPEC).

“We understand right now Pakistan faces some challenges and definitely as a friend China will extend whatever assistance possible,” said Yao Jing while speaking to the media at the Chinese embassy.

The embassy was holding a four-hour long briefing to share details of the upcoming visit of Prime Minister Imran Khan, the future bilateral cooperation and the status of CPEC and misconceptions about it.

The ambassador said the Chinese leaders, government and people are eagerly looking forward to the historical visit of Prime Minister Imran Khan.

“In terms of financial assistance, during the visit of the prime minister we will provide hopefully a grant to the Pakistani government and at the end of the visit there will be good news,” said Lijian Zhao, the deputy chief of mission of Chinese Embassy.

Number of Chinese arriving in Pakistan increasing due to CPEC

The deputy envoy said China does not want to embarrass Pakistani friends but it has provided huge support for stabilising foreign exchange reserves. Only the China Development Bank has provided $2.7 billion commercial loans, he added.

Pakistan has sought financial aid from China, Saudi Arabia and United Arab Emirates. It has so far secured $6 billion lifeline from Saudi Arabia.

The deputy envoy said many agreements and memorandum of understanding (MoUs) will be signed at the end of the PM’s visit. China wants to help Pakistan build its manufacturing capacity.

Khan will attend China’s International Import Expo as chief guest. “This is the major platform for Pakistan to build its image of pro-business, pro-development policies for an emerging Pakistan,” said Chinese ambassador. He said Invest more in Pakistan and buy more from Pakistan is China’s policy.

“China’s capital, China’s technology and also China’s huge market could be a major contributor towards Pakistan’s future development,” he added.

He said during the first face-to-face exchange between Prime Minister Imran Khan and President Xi there will be discussions on current cooperation in different areas and the future cooperation in the economic, social, defense and cultural areas.

The ambassador said China wants to see Pakistan grow economically strong that will also be good for regional peace and stability. “Pakistan has taken new initiatives like offering peace talks to India and showed readiness to play a role in peace in Afghanistan,” said the envoy.

The ambassador rejected all kinds of criticism against CPEC. He said there are some kinds of views regarding economic burden for Pakistan and that implementation of CPEC is not transparent enough and Chinese companies are taking huge benefits.

“All these concerns are irrelevant and we are ready to provide more information to address these concerns. All the CPEC projects are mutually beneficial and CPEC is the manifestation of China’s trust in Pakistan,” said Jing.

He said at the moment 22 projects valuing $19 billion are either under consideration or have been completed. He said by implementing CPEC, China wants to help build Pakistan’s manufacturing base but warned about the international and regional forces conspiring against China and Pakistan relations

He advised that both China and Pakistan should have confidence in each other and make CPEC a platform for regional connectivity. Lijian Zhao said CPEC debt was only 6.3% of the total external debt and liabilities as of June this year. He said terms of the deals were very much in favour of Pakistan.

During the construction period, there are no payments of loans and interests. The repayment period is 15 to 20 years including 5 to 8 years grace period, he added.

He said all the energy projects that are currently under implementation have been financed by the Chinese companies by taking commercial loans. The deputy chief of mission said interest rates of these commercial loans are in the range of 5.3% to 6.3% including the insurance cost.

“CPEC has brought huge benefits for Pakistan. It has so far created 75,000 direct jobs,” he added.

Zhao said in next five years, CPEC will enter into second phase of expansion and broadening.   He said more agreements will be signed on Rashakai special economic zone and its ground breaking ceremony is expected by end of this year.

“PM Imran Khan has mentioned action against corrupt people by China, Chinese government is having strict rules for implementation of CPEC projects,” said the deputy envoy.

“We have been keeping very close eye on all the CPEC projects. Most of the CPEC projects are executed by the Chinese state-owned enterprises, I can assure you that up till now we have not found any irregularity concerned with Chinese companies,” said Zhao.