Riyadh agrees to provid­e $3 billio­n and as much in oil on deferr­ed paymen­t
By Shahbaz Rana
Published: October 23, 2018
Tweet Email 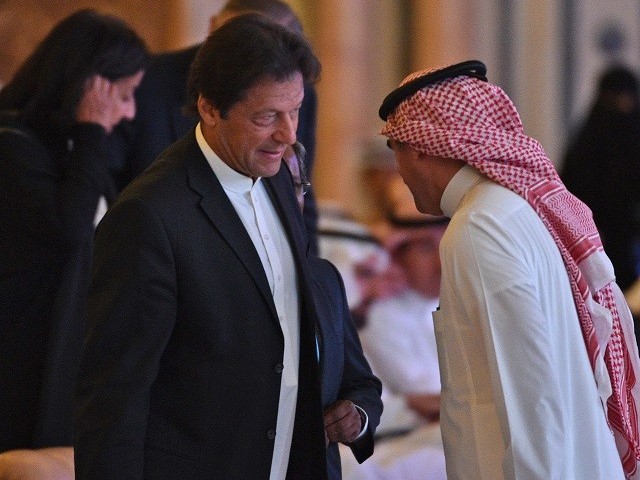 ISLAMABAD: Saudi Arabia on Tuesday provided a $6 billion lifeline to Pakistan on an annual basis in the shape of cash assistance and oil on deferred payments for one year, providing a much-needed breathing space to the government of Prime Minister Imran Khan.

This is the second time when Saudi Arabia has bailed out Pakistan during the last four years. However, the Saudi assistance will not address the long-term financing needs of the economy and the government may still have to enter into an IMF programme.

The Foreign Office announced the details of the deal after the end of two-day visit of the prime minister to Saudi Arabia.

The Saudi assistance will immediately push the official foreign currency reserves back to double digit in addition to lessening the stress on the external sector.

Saudi Arabia will place $3 billion cash deposits with the State Bank of Pakistan, in addition to providing a one-year deferred payment facility for the import of oil, worth up to $3 billion, according to the Foreign Office.

The kingdom has also agreed to reduce visa fees for Pakistanis.

The cash injection will immediately relieve pressure on the government and improve its negotiating position during the upcoming programme loan talks with the International Monetary Fund, starting from November 7.

It was agreed that Saudi Arabia will place a deposit of $3 billion for a period of one year as balance of payment support with the central bank, it added.

The terms of the deposits were not clear. China has also deposited $2 billion with the SBP in July at a nominal rate of around 1%, according to sources in the SBP.

It was also agreed that a one-year deferred payment facility for the import of oil, up to $3 billion will be provided by Saudi Arabia, stated the Foreign Office. “This arrangement will be in place for three years, which will be reviewed thereafter,” it added.

Saudi Arabia agreed to bail out Pakistan during the second visit of the prime minister, as the agreement could not be reached during his September visit to the kingdom.

The prime minister is keen to avoid the IMF bailout package and had requested Saudi Arabia, China and the United Arab Emirates for placement of deposits in the central bank to artificially inflate the foreign currency reserves.

Earlier, the kingdom had given $1.5 billion grant in 2014 when the country’s economy was facing similar pressures.

Saudi Arabia had also given oil on deferred payments in the 1990s, but Pakistan never repaid the amount, according to the officials of the finance ministry.

Pakistan was in search of $12 billion foreign loans and aid to avoid default on international debt obligations, as the country is required to return $11.7 billion loans to foreign countries.

After Saudi Arabian $3 billion cash assistance, the SBP’s reserves will increase to $11 billion. The $3 billion oil on deferred payments will lower the overall financing needs by the same amount, which had been earlier estimated at $31 billion.

The cash assistance will lower the requirements to devalue the rupee, as the one-off assistance will — for the time being — improve the macroeconomic projections, according to the independent economists.

The crown prince agreed to the prime minister’s suggestion to reduce visa fee for Pakistani workers, which is a significant step towards enhancing Pakistan’s workforce in Saudi Arabia as well as facilitating travel of people from both the countries, stated the Foreign Office.

It seems Saudi Arabia will have its footprints in Balochistan.

The Foreign Office said the Saudi delegation had evaluated the possibility of investing in setting up a petroleum refinery in Pakistan during a visit in October. Saudi Arabia confirmed its interest in the project, and a MoU will be signed after obtaining an approval from the cabinet, said the Foreign Office.

It added Saudi Arabia expressed interest in the development of mineral resources in Pakistan. “For this purpose, the federal and Balochistan governments will consult, following which a delegation of the kingdom will be invited to visit Pakistan.”

Saudi Arabia has showed intentions to invest in the Gwadar Oil Refinery.

Although the Foreign Office handout did not mention Reko Diq, Saudi Arabia is keen to invest in the copper and gold mines and discussed the matter during the October visit.