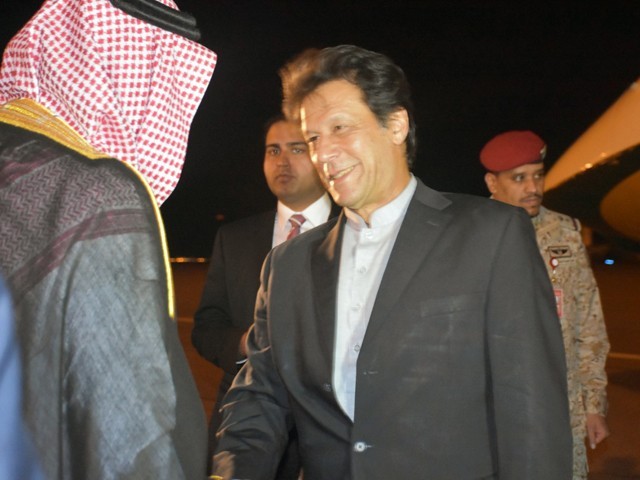 PM Imran is being received at Madina airport upon his arrival in Saudi Arabia on Monday. PHOTO: EXPRESS

ISLAMABAD / RAWALPINDI: Prime Minister Imran Khan has arrived in Saudi Arabia to attend a key investment conference being held in Riyadh from October 23 to 25. 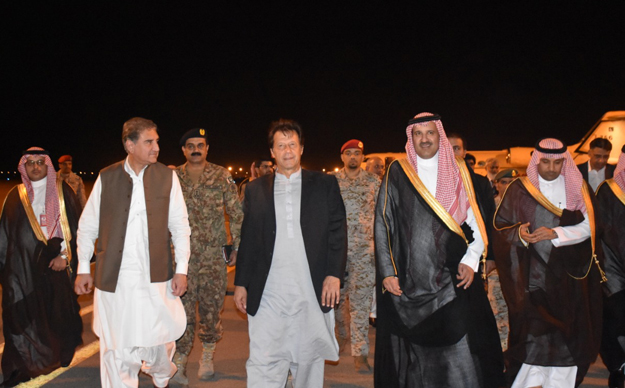 The three-day Future Investment Initiative (FII), dubbed “Davos in the desert”, is being held despite a string of cancellations from leading policymakers and corporate chiefs over the disappearance of journalist Jamal Khashoggi.

PM Imran’s visit comes as Pakistan continues to court “friendly” nations in search of billions of dollars to shore up its deteriorating finances as it faces a balance of payment crisis and upcoming talks with the International Monetary Fund (IMF) over a potential bailout.

“The prime minister’s participation in the conference signifies our solidarity with the kingdom in its efforts to become an emerging hub of international business and investment,” the foreign ministry said in the statement. “The conference provides an opportunity to interact with important business leaders who are interested in investing in Pakistan.”

The conference is being touted as a high-powered showcase for the economic reforms of Crown Prince Mohammed bin Salman — who has been widely accused of having links to Khashoggi’s disappearance.

Pakistan briefly weighed in on the incident earlier this month, calling on Turkey and Saudi Arabia “to jointly address the matter”.

Imran made his maiden foreign visit as premier to Saudi Arabia in September as Islamabad explored alternative avenues to financing before approaching the IMF.

Since taking power in August 2018, Imran has sought loans from allies such as China and Saudi Arabia, promised to recover funds stolen by corrupt officials, and embarked on a series of high-profile populist austerity measures.

But help has been in short supply and economists’ warnings have grown increasingly urgent.

The visit also comes as Pakistan’s central bank warned this week that inflation would likely double in the coming year — hitting 7.5 percent — while the country’s growth target rate of 6.2 percent would likely be missed.

According to sources, while returning from Saudi Arabia, PM will hold high-level meetings with investors and industrialists for three days. After that, he will leave for Malaysia on October 28 and hold talks on economic cooperation. The PM will return on October 29 and hold consultation meetings with his economic team.

PM Imran will then leave for China on November 3 to discuss the China-Pakistan Economic Corridor project and economic cooperation with the Chinese leadership, according to sources.

On Sunday, PM Imran assured the Rawalpindi business community that the economic crisis would soon be overcome.

Speaking to a delegation of Rawalpindi Chamber of Commerce and Industry led by President Malik Shahid Saleem, he said, “The government is working on a comprehensive policy of increasing the exports and reducing the deficit.”

The businessmen presented PM Imran a cheque of Rs5 million for the Diamer-Bhasha and Mohmand dams fund.

Imran said that tariff and refund reforms were being introduced for exports. He urged the traders’ community to step forward and play their role in restoring the economic.

The business community assured the PM of full cooperation.

Imran said that the country was facing economic challenges and all the mega national institutions were in deficit. “The country is in debt. If large water reservoirs are not built, the country can face severe water shortage. Construction of water reservoirs is the top priority of the government,” he added.

WITH ADDITIONAL INPUT FROM AFP.