Takes full respon­sibili­ty of decisi­ons made during his tenure as PM
By Our Correspondent
Published: October 23, 2018
Tweet Email 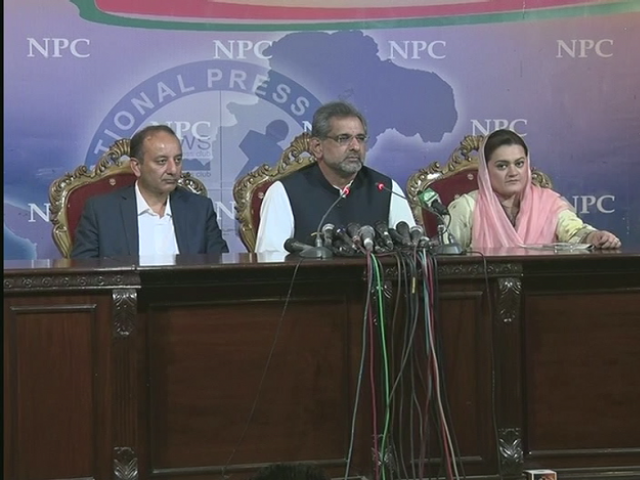 Pakistanis will get cheap electricity for the next 15 years, claims former premier. PHOTO: SCREENGRAB

“I am ready for a live debate even on TV,” he said.

Speaking at a press conference in Islamabad alongside Pakistan Muslim League Nawaz (PML-N) leaders Maryam Aurangzaib and Musaddik Malik, he termed the allegations leveled against his government baseless.

Taking a jibe at the ruling party, Abbasi said the federal and provincial information minister of Punjab should get their minds checked for making absurd statements.

He added that the petroleum and information minister are not aware of the facts pertaining to the Liquefied Natural Gas (LNG) deal. “Pakistan tried pursuing this deal during Musharraf and Pakistan Peoples Party’s (PPP) tenures but failed. However, PML-N succeeded.”

Continuing his criticism, the PML-N leader added that during his tenure, funds were allocated for nuclear power projects to produce more than 3,000 megawatts of electricity.

The PML-N leader also said that details regarding Bhasha dam should be brought to the forefront, adding that the problem with the dam is not funding but reservations harboured by the provinces.

Abbasi further informed the media that major electricity projects in Jamshoro and Hub are also in the pipeline, and claimed that “Pakistanis will get cheap electricity for the next 15 years”.

The former premier said the ruling party had even tried to make the China-Pakistan Economic Corridor (CPEC) controversial. “A third party can only become a part of CPEC after China and Pakistan’s approval.”

While shedding light on government talks with International Monetary Fund (IMF), Abbasi said the IMF has made it clear that they won’t give us money to pay off Chinese debt.

He also said even though PPP and PML-N are sitting on the opposition benches, they will come together and stand beside the government whenever Pakistan is in a problem.

Before concluding his talk, Abbasi said, “If a government functioned by auctioning off buffaloes then this Pakistan Tehreek-e-Insaf (PTI) government has definitely succeeded.”