Call upon govt to notify accept­ance of their demand­s
By Our Correspondent
Published: October 23, 2018
Tweet Email 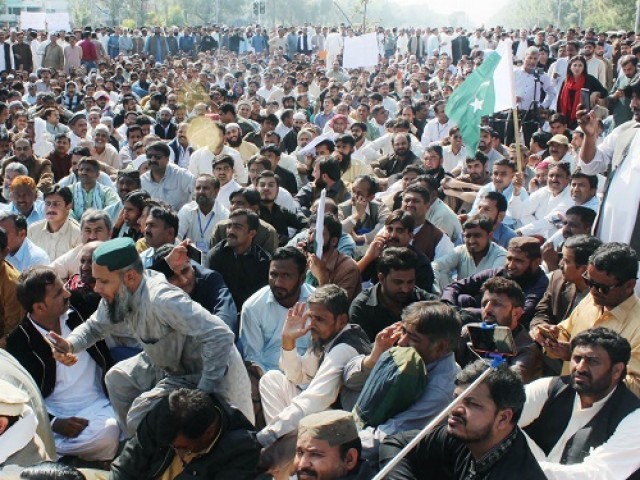 ISLAMABAD: Prime Minister’s Special Assistant for Political Affairs Naeemul Haque has assured full cooperation with the employees of the Utilities Stores Corporations (USC) protesting against an anticipated privatisation of the corporation and in favour of their demands.

The employees, however, refused to end their sit-in until a formal notification from the government. They said the government created an artificial crisis by halting purchases so that the organisation could be pushed towards privatisation.

“We have not been paid our wages for two years while more than 5,000 contract employees and daily wagers are also not being made permanent,” said one the protesters, adding that if the government paid the Rs25 billion dues of the corporation, it could rise on its feet.

The employees also blamed Adviser to PM Abdul Razzaq Dawood for depriving employees of their jobs during his tenure as commerce minister in the Musharraf era. They described him as an anti-labour person.

Haq also visited D Chowk to talk to the protesting employees. He agreed that the demands of the protesters were just. However, he rejected the impression as baseless that the corporation was being sold to PM’s friend Zulqurnain Khan.

He also announced that the government would provide houses to all employees of the corporation from the PM’s five million homes scheme.

“Daily wagers and contract employees will soon be made permanent and dues of the corporation will be written off,” assured the PTI leader, asking the protesters to end their sit-in.

He told the protesters that the PM’s adviser on industries was returning later that day after which all their concerns would be addressed. But the employees refused to end their sit-in, saying they were being offered nothing but a lollypop. They called upon the government to issue a notification about the acceptance of their demands if it wanted to see them dispersed.