This is their fourth victor­y in as many years at the Cambri­an Patrol compet­ition being held in Wales
By News Desk
Published: October 19, 2018
Tweet Email 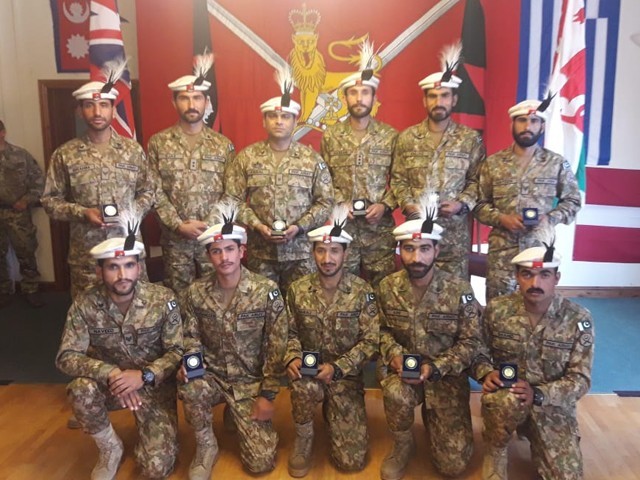 This is their fourth victory in as many years at the Cambrian Patrol competition being held in Wales. PHOTO: ISPR

An 11-member Pakistan Army team won gold medal in Cambrian Patrol competition being held in Wales. This is Pakistan Army’s fourth victory in as many years at the competition, dubbed as the world’s toughest.

Members of the team are all brave soldiers of a battalion of Northern Light Infantry and hail from Gilgit-Baltistan, said a statement issued by the Inter-Services Public Relations (ISPR).

A total of 134 teams from 31 countries are participating in the two-week long competition, which started on October 8.

It is physically challenging and arduous exercise, which concentrates on teamwork for achieving the mission held in the most unforgiving mountainous terrain of mid-Wales, UK, amid tactical and technical challenges, testing leadership, self-discipline, courage and determination of the participants.

The competition began in 1959, when a group of Welsh Territorial Army soldiers designed a weekend training event featuring long-distance marching over the Cambrian mountains and culminating in a shooting match on the Sennybridge training area.