At Rs20m, the grass in this park is dearer than gold

At Rs20m, the grass in this park is dearer than gold 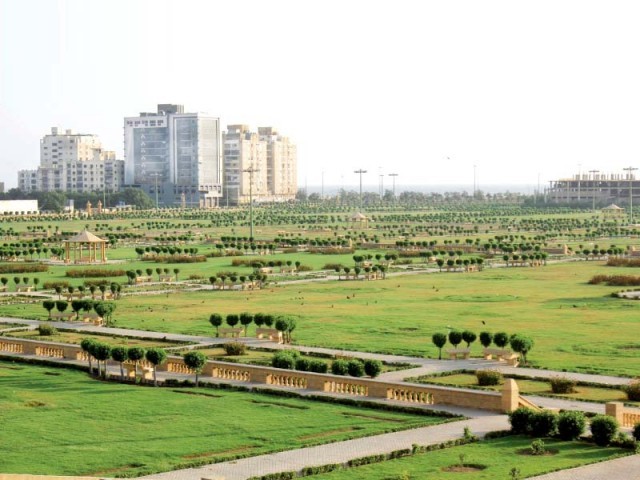 KARACHI: There is no concept of a public garden without trees. The Karachi Metropolitan Corporation (KMC) does not, however, see it this way as they are renovating and developing the city’s prestigious park by only growing lawns and trimming the shrubs.

KMC has been working on the renovation of the Bagh Ibne Qasim in Clifton for the last 18 months, which is meant to be open for public in December. Millions of rupees are being spent just to grow the grass and trim the existing shrubs (conocarpus) with not a single tree being planted in the entire park.

University of Karachi Institute of Environmental Studies Assistant Professor Dr Zafar Iqbal Shams said, “If you get exposed to sunshine in any park, then what’s the use and purpose of it,” adding that KMC officials don’t know the very definition of a park.

Karachi has been badly affected due to the ‘urban heat island phenomenon’, which according to Dr Shams, is caused by the cemented and concrete structures in any metropolitan area that radiate the absorbed heat resulting in a rise in temperature of the area and its surroundings. A large number of trees are needed to fight this effect.

According to Dr Shams, a tree weighing one ton has the capacity to absorb an average of 500 kilograms of carbon. He added that parks should be environment-friendly. A ‘tree-less’ park has no benefit for the environment.

One of the benefits of trees, according to Dr Shams, is that they absorb water-soluble and toxic gasses from the atmosphere and give back oxygen for human consumption.

“Once I visited a park in Gulshan-e-Iqbal area where the KMC had constructed big cemented canopies and benches were placed under them,” he said, criticising the builders and questioned why they could not grow trees with extended crowns that people could use for shade.

“There is a dire need to cool down Karachi, and that can only be done through planting trees of various native species to bring the diversity in flora. However, monoculture plantation is not sustainable,” Dr Shams said, referring to the plantation of single-type plants (conocarpus) by previous mayor Mustafa Kamal.

Bagh Ibne Qasim has been closed for renovation since April last year. One of the officials working at the site told The Express Tribune that it was a barren land for which 600 labourers of the parks and horticulture department were called over from all zones of Karachi for renovation works. 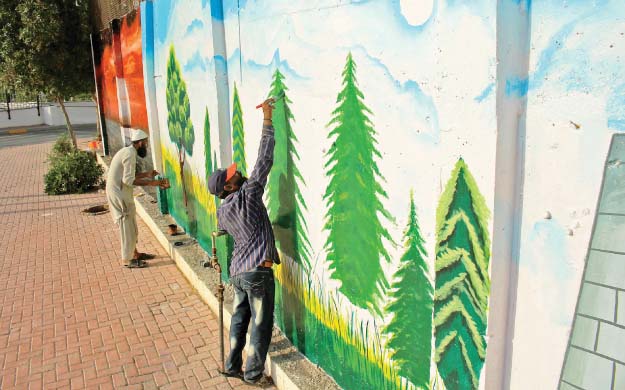 Grass was grown, shrubs were trimmed, seasonal plants were planted and the boundary wall was restored. Currently, up to 300 staff members are working in two shifts to maintain the grass and shrubs in Karachi’s biggest park, according to the official.

In fiscal year 2017-18, Rs20 million worth of grass was grown in Bagh Ibne Qasim and Rs12.3m worth civil work was done to renovate the existing boundary wall of Jahangir Kothari Parade.

In the current year, Rs 40m have been approved for the renovation, restoration and protection of the park in two phases with another Rs20m for restoration of irrigation and lighting system at the park.

Horticulturalist Tofiq Pasha Moraj said that it’s unfortunate that no one would find a tree providing shade to the visitors in any of the KMC parks. “In my childhood days, people would visit parks during noon to sit under the shade of trees to beat the heat but now the department has introduced a new culture to visit parks only in evenings as there are no shade-giving trees,” he said.

Moraj said, “The KMC don’t have qualified people who can plant trees. Either they choose wrong species or handle trees in the wrong way, so the trees planted by them ultimately die. It’s like they don’t have expertise in parks and horticulture department.”

Ecologist Rafiul Haq said that the Bagh Ibne Qasim gives a nice view from the Kothari Parade with symmetry but that is not always enough. He said, “Maintaining the lawn in such a big area is a nightmare, but the KMC should also incorporate the missing general features of parks like fountains, rockery, jogging track and swings for the recreation of visitors.”

The trees also play a vital role in increasing the biodiversity of the area and have dozens of practical benefits as they become self-sustaining after few years of being planted. KMC has, however, failed to plant trees in the newly-renovated park and have relied on cosmetic and short-term changes, Haq added.

Karachi Mayor Wasim Akhtar told The Express Tribune that the KMC has otherwise planted a large number of trees in Bagh Ibne Qasim on the pattern of Central Park in New York, which are in their rearing stage. “It’s just the beginning and we have improved the situation as far as possible as we got the park in a sorry state,” he added.

KMC Parks and Horticulture department Director General Afaq Mirza could not be reached despite repeated attempts to contact him.

MoU in works: Sukkur to be a ‘sister-city’ of Springfield