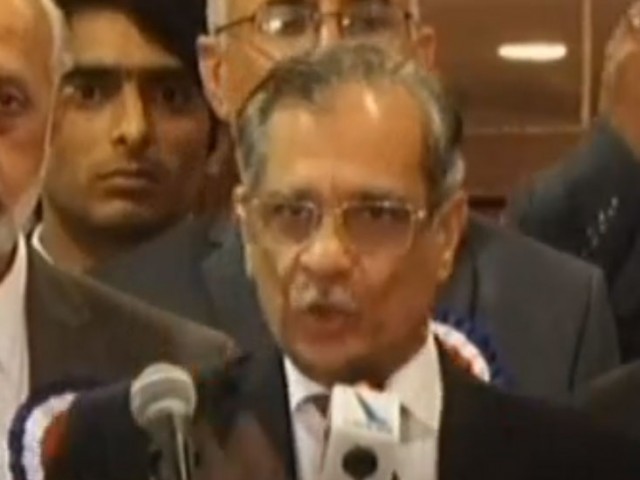 LAHORE: A group of lawyers on Saturday had a noisy argument with Chief Justice of Pakistan (CJP) Mian Saqib Nisar after he insisted on applying a section of the Anti-Terrorism Act (ATA) on attorneys implicated in a scuffle inside the court premises.

The lawyers were calling for the removal of Section 7 of the ATA from the FIRs registered against them, and restraining police officials from arresting them. After Justice Nisar refused to budge, the lawyers walked out of the court and staged a sit-in at the GPO Chowk.

Earlier, the lawyers crowded the CJP’s court and shouted ‘shame, shame’ when Justice Nisar commenced proceedings on a suo motu notice on a scuffle in the sessions court during which the lawyers had thrashed a police official.

“Being the father of the judiciary, I feel ashamed of the lawyers’ actions,” said the chief justice.

Lahore Bar Association (LBA) President Malik Arshad retorted that nothing wrong had happened. “My Lord, you have nothing to be ashamed of,” he said.

Harsh comments were exchanged between the CJP and the lawyers who wanted a prompt relief.

But the CJP made it clear he would not be pressured and everything would be done in accordance with the law.

“I am ready to tender resignation and [even] face abusive language but I will dispense justice on merit,” the CJP asserted. “Lawyers chanting slogans … will not be allowed [to enter] again in this court room,” he added.

The lawyers threatened to stage a sit-in if their demands were not met immediately.

On this, the CJP told them to go and stage a sit-in, adding that he was ready to face the consequences.

Arguing that conspiracy was being hatched against lawyers, the LBA president insisted that the lawyers had not thrashed the policeman.

The CJP remarked they should have notified accordingly.

The lawyers started shouting ‘shame, shame’ which irked the CJP.

“You should be ashamed,” he said. “I will watch the video clip in the court and determine what had actually taken place in the sessions court.”

The LBA president said that if police officials had respected the courts, this matter would not have been brought in before the CJP.

When the LBA president requested the court to remove 7 ATA from the FIRs registered against the lawyers, the CJP remarked, “If this action falls under 7 ATA, it will be applied. If you believe 7 ATA should not be included in FIRs, ask the courts to remove it.”

The CJP made it clear that elements responsible for the incident would not be spared and if found guilty, they would have to face appropriate punishment.

When the LBA president asked the CJP if the police high-ups had suspended the police official concerned over his conduct, the CJP sought a report from the police on the matter.

Murshad, the LBA secretary, once again urged the court to suspend 7 ATA from the FIRs, but the CJP refused.

When Arshad, the LBA president, complained that there had been an understanding between the bar and the bench that footage of CCTV cameras installed at sessions court would not be leaked to the media, the CJP brushed aside his objection, asking why such videos should not be aired.

The lawyers then demanded that CCTV cameras should also be installed inside police stations.

Justice Nisar admonished a lawyer when he objected to the in-camera proceedings of the Supreme Judicial Council (SJC) and called for a ‘leak’ of its footage too.

The bar leaders requested the chief justice to suspend the operation of the FIRs lodged against lawyers as the Punjab Bar Council (PBC) had already taken cognisance of the incident and an investigation was underway.

However, the chief justice said he would not pass any order without hearing the point of view of the other side. He said the video of the incident would be shown on a screen projector in the court first on the next hearing to determine who was guilty and who was not.

The chief justice then sought a report from the police about the case by next week and directed the PBC vice chairman to conduct an inquiry into the incident.

Later, CJP Nisar walked to the GPO Chowk where he made it clear to the lawyers that he would not be intimidated by their ruckus.

“If I cannot dispense justice on merit, I have no right to sit on the [top] post,” he said.

The lawyers apologised to the chief justice and maintained that they would not go against his orders.

Whitening of black money: new amnesty scheme on the cards