Ushosh­i Sengup­ta has won the covete­d title of ‘I Am She’ Miss Univer­se India 2010 and will be repres­enting India...
By IANS
Published: June 2, 2010
Tweet Email 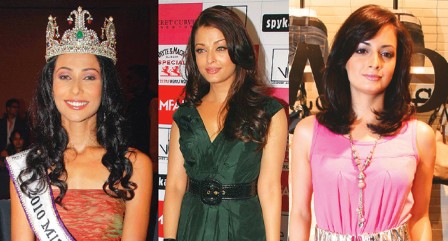 MUMBAI: Ushoshi Sengupta has won the coveted title of ‘I Am She’ Miss Universe India 2010 and will be representing India in the Miss Universe 2010 in August.

“Everyone says that this is a journey, but for me this is the destination and trust me, the feeling of reaching this destination is amazing. When I participated in this contest, I was not thinking of the goal, I was thinking that I have to do it. I must and I will,” Sengupta said. “I am so proud to believe that I am going to represent India. I got this opportunity and will make the most of it,” she added.

Sengupta is not the first pageant winner who dreams of making it big in Bollywood and a number of Bollywood’s biggest stars have a title or two under their belts.

This group includes Zeenat Aman who appeared in Bollywood films in the 1970s and 1980s and was the second runner up in the Miss India contest and went on to win the Miss Asia Pacific title in 1970.

Sushmita Sen was the first Indian woman to be crowned Miss Universe in 1994. She won the title of Femina Miss India in 1994 and went on to work as an actor and released her first film Dastak in 1996.

Perhaps the most famous pageant winner turned actor is Aishwarya Rai Bachchan who worked as a model and gained fame after winning the Miss World title in 1994.

Since then Rai has worked in over 40 films including a number of international productions such as Bride and Prejudice and The Pink Panther 2.

Priyanka Chopra is a former Miss World and won the title in 2000. She also worked as a model and made her acting debut in 2002 with Tamil film Thamizhan. She made her Bollywood film debut with The Hero: Love Story of a Spy and followed it up with the hit Andaaz. She is currently one of the leading contemporary actors in Bollywood.

Lara Dutta is another winner from 2000 when she won the title of Femina Miss Universe India and Miss Universe. In 2003 Dutta joined Chopra for the hit film Andaaz and has recently starred in the Bollywood blockbuster Housefull. 2000 was a good year for Indian pageant winners as Dia Mirza won Miss Asia Pacific this year. Mirza made her film debut with Rehna Hai Terre Dil Mein for which she received a nomination for ‘Best Female Debut’ at the Zee Cine Awards.

Judging from this long list Sengupta has a good chance of making a career in Bollywood.

The young beauty is working hard and intends to have a prosperous career. Bollywood actor and previous Miss Universe Sushmita Sen’s production company Tantra Entertainment has been awarded the India franchise by the Miss Universe Organisation from this year to annually select a participant for the event.

With additional information by News Desk