Iran not against any country's involvement in CPEC: envoy

Iran not against any country's involvement in CPEC: envoy

Pakist­an and Iran on the same page when it comes to dealin­g with the menace of terror­ism, says Dost
By Muhammad Zafar
Published: October 4, 2018
Tweet Email 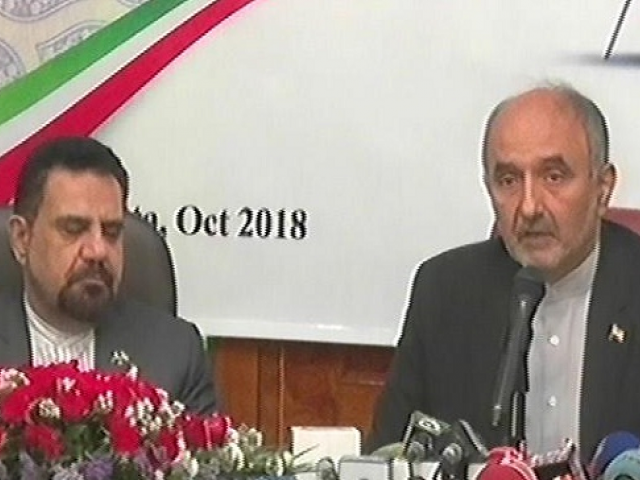 QUETTA  : Tehran’s envoy to Islamabad on Thursday said Iran does not oppose the involvement of any country in the China-Pakistan Economic Corridor (CPEC) as the project is a “game changer” for the region.

“CPEC is a game changer and we do not oppose any country’s participation,” said Iranian Ambassador to Pakistan Mehdi Hunar Dost while alluding to reports of Saudi involvement in the project.

Dost also reiterated Tehran’s stance of jointly combatting terrorism with Islamabad as both countries are “targets of terrorism”.

The envoy, addressing the media in Quetta, said Pakistan and Iran are on the same page when it comes to dealing with the “menace of terrorism”. The Iranian envoy, referring to Pakistan as a strategic partner, said the two countries have many commonalities and enjoy religious and cultural relations.

Iranian Ambassador to Pakistan Mehdi Hunar Dost says Pakistan & Iran are on same page against the menace of terrorism. He said both countries have a lot of commonalities & enjoy religious & cultural relations. Pak-Iran cordial relations are important for bright future. pic.twitter.com/jKcdOUpIJ6

The Iranian ambassador added that all problems can be resolved through dialogue, and stated that cordial relations between the two neighbours are important for the region

“Some actors want to disturb relations by carrying out cross-border attacks,” the ambassador said and added that foreign powers are taking advantage of the internal divide between Muslim countries and giving rise to instability.

“Pakistan and Iran will present a united front against mutual enemies.” the ambassador reaffirmed.