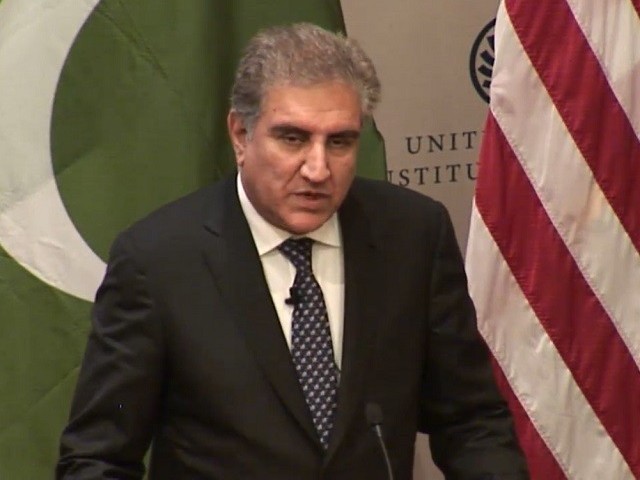 KARACHI: Foreign Minister Shah Mehmood Qureshi has said that Pakistan’s efforts for bringing back peace in Afghanistan should not be overlooked and it will be unfair to ignore its sacrifices in the war against terrorism.

Speaking at the United States Institute of Peace on Wednesday to share the Pakistan Tehreek-e-Insaf (PTI) government’s strategy for engaging with the United States, he said Pakistan is willing to bring Taliban to the dialogue table as peace in Afghanistan is linked with peace in Pakistan.

The session was live streamed for international audience.

“We can’t be peaceful if there is no peace in Afghanistan. But, we’ll have to have that collective approach to resolve the issue … It’s a shared responsibility and there are now more players involved,” said the foreign minister, adding that Pakistan’s influence on Taliban has diminished but the country will leave no stone unturned for the resumption of peace talks.

Commenting on Pakistan-US ties, he said Tuesday’s meetings with Secretary of State Mike Pompeo and National Security Adviser John Bolton went well. “The meetings were useful, and forward looking. I am leaving the US with hope,” he added.

Qureshi reiterated that engagement between Pakistan and the US had always been mutually beneficial and a factor for stability in South Asia.

He said bilateral ties have been cyclical, and had highs and lows, adding that the last few years were indeed ‘difficult’. “But, I am here to rebuild ties. History tells us that we’ve benefitted by standing with each other,” he remarked while addressing a sizeable audience.

The Pakistani foreign minister noted that Pakistan-US ties are dependent on situation in Afghanistan. “The road to Washington goes from Kabul and that’s why I chose Kabul as my first destination after becoming the foreign minister,” he added.

Qureshi said reduction in violence in the war-torn country is the joint objective of Pakistan and the US. He said border management and respectful repatriation of Afghan refugees in a time-bound manner will contribute in peace and security in the two countries.

He said Pakistan’s successes in dealing with terrorism and extremism must be recognised and invited the US congressmen to visit the tribal areas following the military operations to witness that the area did not hold any safe havens for terrorists.

The PTI leader said the new government in Pakistan has an agenda for change, which can only be imposed “if we have peace and stability. So we can provide water, jobs and basic necessities to masses.”

Qureshi said there was a new convergence in the making and it is a great opportunity that shouldn’t be missed to achieve peace in Afghanistan.

He said that a realistic, honest and pragmatic approach is required to reset bilateral relation between Pakistan and the US.