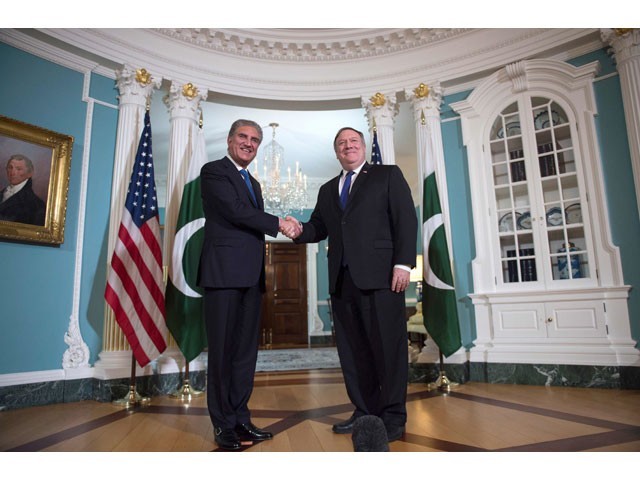 WASHINGTON: US Secretary of State Mike Pompeo pressed Afghanistan’s Taliban to come to the table to end the long-running war as he called on Pakistan to play a supportive role, the State Department said on Wednesday.

Pompeo met in Washington with foreign minister, Shah Mehmood Qureshi, in the latest US outreach to the government of Prime Minister Imran Khan, a longtime advocate of a negotiated settlement with insurgents.

Pompeo appreciated Pakistan’s support for political reconciliation in Afghanistan and for peace in the neighbourhood, APP reported.

The top US diplomat, who met PM Imran last month in Islamabad, “emphasised the important role Pakistan could play in bringing about a negotiated settlement in Afghanistan,” State Department spokesperson Heather Nauert said.

Pompeo “agreed that there was momentum to advance the Afghan peace process, and that the Afghan Taliban should seize the opportunity for dialogue,” Nauert said of the meeting, which took place Tuesday.

President Donald Trump has doubled down on the war effort in Afghanistan despite his past calls to end the longest-ever US war.

But diplomatic efforts have also intensified, with US officials meeting in July in Qatar with representatives of the Taliban, whose hardline regime was overthrown in a US-led operation in the wake of the September 11, 2001 attacks.

In August, Pompeo congratulated PM Imran in a telephone call on taking office.

The United States has pressed for years for Pakistan to crack down on the Taliban and Haqqani network as well as virulently anti-Indian groups that operate virtually openly in parts of the country.

Trump has suspended military assistance worth hundreds of millions of dollars to Pakistan.