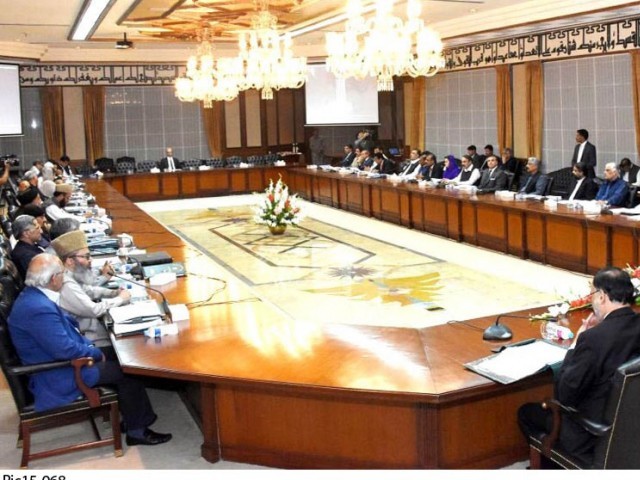 ISLAMABAD: Prime Minister Imran Khan has approved yet another round of expansion in the federal cabinet, sources told The Express Tribune. At least five new ministers will be inducted into the existing 28-member federal cabinet.

According to the sources, Muhammad Faisal Vawda will be given the portfolio of Ministry of Water Resources, Senator Azam Khan Swati will get Ministry of Science and Technology, Muhammadmian Soomro will head the Ministry of Privatisation, Ali Amin Gandapur will look after the Ministry of AJK and Gilgit-Baltistan while Zartaj Gul Wazir will take care of the Climate Change Ministry as state minister.

With the inclusion of five new ministers, the strength of federal cabinet will reach 33, including 23 federal ministers, six state ministers and four advisers to PM.

The new ministers are likely to take oath of their respective offices this week. President Dr Arif Alvi will administer the oath.

The Constitution also allows prime minister to have a maximum of five advisers at a time, while PM Khan currently has four.

The Constitution is silent about the maximum number of special assistants PM can have and a special assistant is not counted as a member of the federal cabinet. Currently, the PM has four assistants – one each on accountability, media, political affairs, and overseas Pakistanis.

Prime Minister Khan is a bit concerned about “unfair” public criticism of his government’s economic policies, growing primarily due to “lack of proper explanation from the government on tough economic decisions”.

On Tuesday, the premier directed his lieutenants to manage mainstream print and electronic media effectively and on a regular basis to disseminate exact information and reasons to the public behind “unpopular but realistic” economic decisions.

The PM issued the directives during a meeting with the party’s spokespersons at the PM Office.

The federal government has recently faced backlash from political opponents and the public after it enhanced gas prices in the country while a similar decision is expected over electricity prices.

The Economic Coordination Committee on Tuesday deferred a decision to hike electricity price up to 61 per cent and sources claim that the deferment came in view of the upcoming by-elections in 37 constituencies.

“There is a need to inform the voters in simple words that by not increasing electricity prices the government will continue to pile up circular debt and further deteriorate the country’s economy,” said a senior leader who attended the meeting.

He said similar issues were discussed during the meeting and the government spokespersons who interact with the media on a regular basis were asked to consult relevant ministers and decision makers to get exact knowledge and real motives behind tough economic decisions and disseminate the information among people.

Another senior PTI leader who participated in the meeting said the government intended to increase tax net by including non-filers to the taxation fold and the spokespersons had been asked to represent the policy effectively in support of the government’s tax net expansion plan.

“Due to lack of information, rumours circulate and create poor impression about governance,” he said.

The leaders have also been asked to “create awareness about false economic policies of the last government and a fragile economy inherited by the incumbent government from its predecessors”.