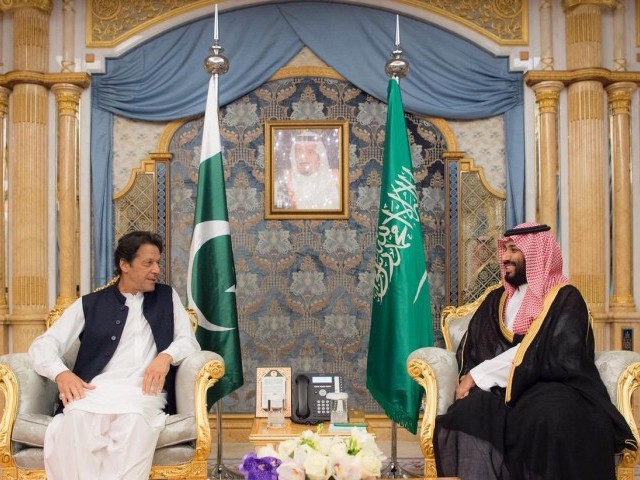 ISLAMABAD: Pakistan is likely to offer Riyadh stakes in Reko Diq mines and LNG-fired power plants in return for oil on deferred payment and cash assistance, setting the pitch for a new strategic partnership with Saudi Arabia.

According to sources in the commerce ministry, Pakistan is open to Saudi Arabian investment in Reko Diq gold and copper mines, and a memorandum of understanding (MoU) could be signed during the five-day visit of a Saudi delegation to Islamabad, starting today (Sunday).

Saudi Arabia has also offered to set up a multi-billion-dollar oil refinery in Gwadar besides acquiring stakes in LNG-fired power plants in Punjab, according to an official of the commerce ministry.

There was a flurry of activity in the federal capital after a visit by Ahmad Agil Al-Khateeb, the Advisor to Saudi Crown Prince Mohammad bin Salman, on Thursday. Al-Khateeb visited just days after Prime Minister Imran Khan paid a visit to the monarchy.

Pakistan also offered Saudi Arabia to join China-Pakistan Economic Corridor (CPEC) projects, but there was yet no official world either from Saudi Arabia or China.

The sources said that Pakistan would mainly focus on finalising modalities of securing oil on deferred payment to avert a balance of payments crisis.

Pakistan’s oil import bill is likely to surge by $4 billion to nearly $18.5 billion this year on the back of the increase in crude oil prices.

The country, said the sources, urgently required oil worth more than $2 billion oil on deferred payment in addition to cash support from the kingdom to immediately avoid going to the International Monetary Fund (IMF) for assistance.

Alongside, Pakistan is also engaged with the IMF as the country needs at least $11 billion to meet its international obligations of debt repayments and imports during the current fiscal year (2018-19). Short-term debt worth $5.6 billion will soon mature and economic mangers are planning to request China for a rollover of loans worth at least $2.8 billion this fiscal.

Advisor to Saudi Ministry of Energy, Industry and Mineral Resources Ahmad Hamed Al-Ghamdi is, meanwhile, heading the Saudi delegation that is arriving in Pakistan today. Zarea Qaranbaish, the Director of Strategic Partnerships and Business Development of the Saudi Center for International Strategic Partnerships, and representatives of Saudi Aramco, the kingdom’s oil company, are also part of the delegation.

The Saudi delegation, according to the sources, will visit Gwadar. In case of an agreement between the two sides, Saudi Arabia might set up an oil refinery in Gwadar with a refining capacity of up to 100,000 barrels per day (bpd).

The sources said that the most major development in the wake of the Saudi delegation’s visit could be an agreement on Saudi Arabian investment in Reko Diq gold and copper mines.

The previous PML-N government also wanted to privatise two LNG power projects – Haveli Bahadur Shah and another one located near Balloki, owned by the National Power Parks Management Company Limited. But it dropped the idea because of the cumbersome process that also required approval of the Council of Common Interests (CCI).

The mode of Saudi investment in the power sector is still not clear.

The sale of the government assets is considered as divestment, requiring many steps, including due diligence, selection of financial advisers, evaluators, calling bids and short-listing of prospective bidders.

The divestment is the subject of the Privatisation Commission.

A third LNG power plant, owned by the Quaid-i-Azam Thermal Power Private Limited, a Punjab government company, could also be offered to Saudi Arabia for investment, said the sources.