Cost of being a frontline state: $68b

Cost of being a frontline state: $68b 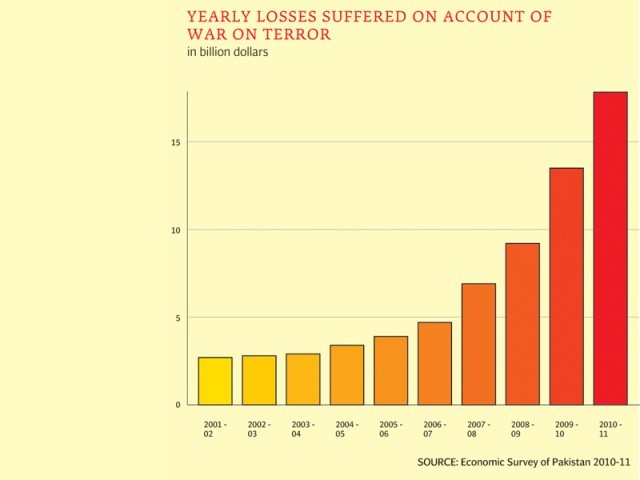 2010-11 losses are the highest since Pakistan became the frontline state in the war against terrorism.

While pressure to launch an operation in North Waziristan mounts, the latest economic survey reveals that Pakistan has already suffered almost $68 billion (Rs5.1 trillion) in losses – equivalent to almost half of the country’s total debt – on account of being a frontline state in the war on terror.

The damage to the social fabric of society in addition to that, is unquantifiable.

The 2010-11 losses are the highest in any given year since Pakistan became the frontline state in global war against terrorism.

These losses do not include the damages on account of a recent attack on Pakistan Navy base in Karachi, destroying two surveillances aircraft, the P3C-Orion.

The figures have been compiled by an inter-ministerial committee of the ministries of foreign affairs, finance, interior, commerce and representatives of Balochistan and Khyber-Pakhtunkhwa provinces – the worst-hit federating units.

“Since 2006, the war has spread like a contagion into settled areas of Pakistan that has so far cost the country more than 35,000 citizens, 3,500 security personnel, destruction of infrastructure, internal migration, nose-diving of production and growing unemployment,” notes the survey.

It adds: “the war not only caused serious damage to economy but also to the social fabric of Pakistan.”

In contrast to $67.9 billion in losses both direct and indirect, the United States has so far given $13 billion in aid to Pakistan, of which almost $9 billion are military disbursements and $4 billion in net civilian aid.

The total amount is lesser than what Pakistan suffered in losses in fiscal year 2010-11 alone.

“In the current financial year, the US has disbursed $745 million of Coalition Support Fund (CSF) and the government is expecting another tranche before end of June,” said Secretary Finance Dr Waqar Masood.

The government expects to receive $1.45 billion this year on account of CSF – money that it has already spent while rendering military services and is now seeking reimbursements for.