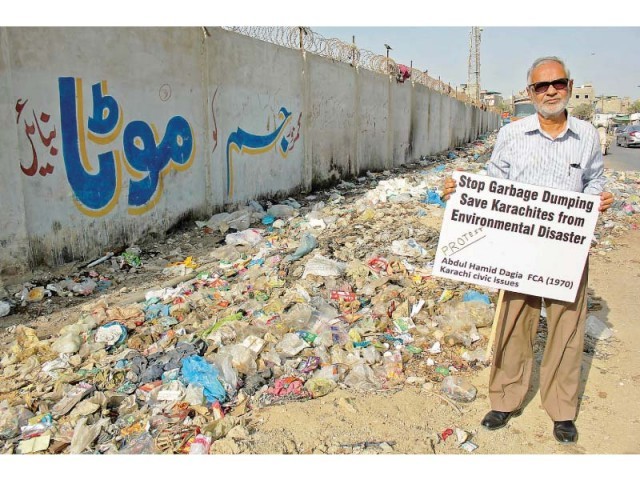 The 74-year-old Abdul Hamid Dagia, a professional accountant, has taken it upon himself to create awareness about the civic issues especially lack of cleanliness and the deteriorating sewerage system that has made living in Karachi a health hazard. PHOTO: ATHAR KHAN/EXPRESS

KARACHI: When governments fail to deliver, it becomes incumbent upon the citizens to raise their voice. Abdul Hamid Dagia knows this all too well.

The 74-year-old professional accountant has taken it upon himself to create awareness about the civic issues that plague the city as well as the government’s apathy toward the citizens’ plight. His main peeves – lack of cleanliness and the deteriorating sewerage system that has made living in Karachi a health hazard.

“Karachi was seventh least livable city in 2017 and dropped by three positions this year to stand at number four,” Dagia told The Express Tribune. “I’m worried about where the government wants to take Karachi. It wasn’t always like this,” he lamented.

To make his point and reach a larger audience, Dagia set out on a mission back in April 2015 to highlight the various civic issues plaguing the port city. At least thrice a week, he would stand by piles of garbage, potholes and polluted sewerage drains, holding up a placard to register his protest. The idea was to draw attention to the growing piles of garbage appearing in the city, which no one bothered to pick up.

Besides these demonstrations, Dagia also uploads recorded videos, some featuring the demonstrations and others in which he talks about Karachi’s civic problems and ways to address them. Each week features a new topic and the video is uploaded to his social media page, Karachi CIVIC Issues’.

The harshest critique, Daqia reserves for the chief executive of the province, Murad Ali Shah. The chief minister, he says, has promised at least a dozen times that the city would be cleared of garbage within days or weeks, but no tangible results have emerged from all the rhetoric thus far. According to Dagia, rampant corruption in government departments is the main reason behind the deplorable condition of the city’s civic facilities.

He is also worried about the fast-decreasing tree cover in the country. “Pakistan has the least forest cover in the region with only 1.9% of its total area covered under forests,” he said. “It poses a great threat to the entire country but Karachi is suffering the most due to its high population density,” he added.

But there is still hope. For the situation to improve, Dagia believes, the first step the provincial government must take is to devolve powers to the elected local government representatives. Only then will the residents get some relief, he said.