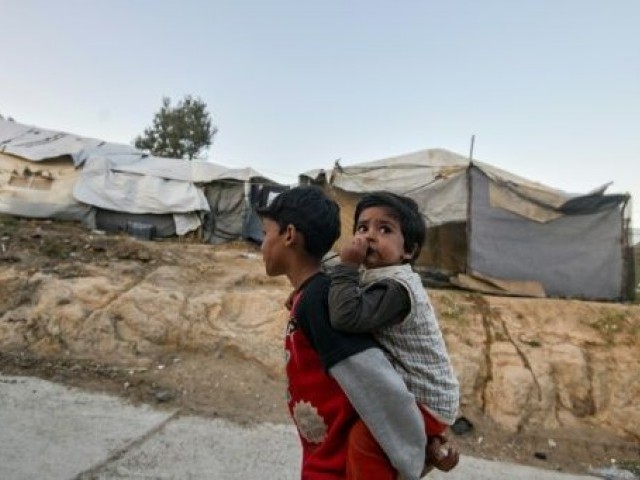 Children are among those packed into the Moria migrant camp on the Greek island of Lesbos. PHOTO AFP

MORIA, GREECE: Thousands of migrants packed into overcrowded camps on the Greek islands are bracing for winter in conditions that have already driven some there to attempt suicide.

Even those on the list for transfer to the mainland after NGOs exposed the poor conditions there are hoping to make the trip before seasonal rains turn their camp into a field of mud.

“Why don’t the Greeks do anything when they get a lot of money to take care of us?” asked Jamal, 53, at the Moria camp on the island of Lesbos, the biggest in Greece.

His question echoed the frustration of many others stuck in the camp at the government’s apparent inability to provide even the most basic amenities.

Jamal, a Somalian, arrived three weeks ago with his 21-year-old daughter, who is blind and suffers from debilitating hemiplegic migraines.

He may be among the lucky few, some two thousand, to benefit from an accelerated transfer to the mainland.

Earlier this month, medical charity Doctors Without Borders (MSF) reported multiple cases of suicide attempts and self-harm among those stuck at the camp, including some children.

Workers at the camp had already threatened to strike in protest at what even the government acknowledged was “near impossible” overcrowding.

But despite a 2016 agreement between Turkey and the European Union, the migrants are continuing to arrive.

For although the islands of Lesbos and Samos, which shelter the biggest migrant camps, are both Greek, they sit just off the Turkish coast, on the eastern side of the Aegean.

Under humanitarian law, most qualify for passage to Greece. Among them is Jamal, who is waiting for his passage to the Greek mainland, due on October 8.

In the meantime he has to make do with an overcrowded tent lined up, like hundreds of others, around the fence delineating the official Moria camp.

These places change hands for between 60 and 100 euros ($70-$116), but when the first rains come they risk transforming the makeshift campsite into a field of mud.

And already, the cold autumn winds are beginning to bite.

In the meantime, he and his fellow migrants complain about the hours they have to spend queueing for poor-quality food every day, about the cold showers and the dirty toilets.

Jamal’s daughter at least has a more robust shelter inside the camp itself.

But the poor conditions reported by MSF and 19 other aid agencies have not gone away, and the migrants stuck there grow increasingly impatient.

“Wait, wait, we always have to wait,” said Sylvie a 24-year-old who fled her home in the Democratic Republic of Congo.

She arrived with an eye injury which has only got worse since her stay, she said, adding: “I don’t think they have given me the right medicine.”

Conditions at the camp made things worse for people already suffering from whatever trauma forced them to flee their homes, said MSF, which also highlighted significant gaps in the protection of children.

And the children, mainly from Afghanistan and Syria, make up a third of the camp’s population.

In its defence, Greece has pointed to the continuing flow of new arrivals— and the failure of EU member states to reach agreement on sharing out the migrants.

And those running the camp have pointed to the facilities on offer there: lessons for the children, dental and eye care.

Mandek, a Somali woman, counts herself fairly lucky, even if she still dreams of getting her nine-year-old daughter Filsna and her two boys, one and three, to Germany.

The sewage system is up and running again, after a barrage of criticism and threats from local officials to close them down if the problem, which was stinking out the camp, was not resolved.

But winter is just around the corner, and the fear is that the camp will be as ill-equipped as it was in previous years to cope, until the state is once more forced to step in to resolve the next crisis.

Children make up a third of the 8,000-strong population of the Moria migrant camp on the Greek island of Lesbos, which is only meant to hold 3,000

China says not seeking to dethrone US as top power