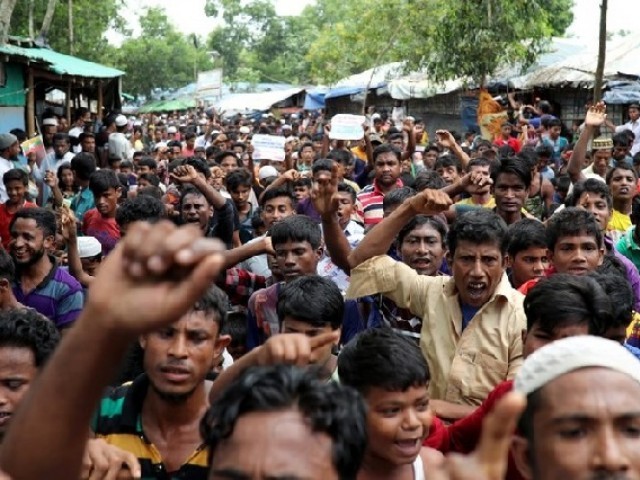 Rohingya refugees shout slogans as they take part in a protest at the Kutupalong refugee camp to mark the one year anniversary of their exodus in Cox's Bazar, Bangladesh. PHOTO REUTERS

WASHINGTON: Leaders of the US House of Representatives Foreign Affairs Committee called on the Trump administration on Wednesday to declare the Myanmar military’s campaign against the country’s Rohingya Muslim minority a genocide, days after a State Department report stopped short of that description.

“Making a formal determination of genocide must be the next step for the US,” Representative Ed Royce, the committee’s chairman, told a hearing on the issue. “Defining these atrocities for what they are is critical to building international public awareness – and support – to stop them.”

The US Department of State, which would make the determination, did not immediately respond to a request for comment on Royce’s statement at the hearing.

Royce held the hearing, titled “Genocide Against the Burmese Rohingya,” just two days after the State Department released a report finding that the military in Myanmar, also known as Burma, waged a “well-planned and coordinated” campaign of mass killings, gang rapes and other atrocities against the Rohingya.

But the report, which could be used to justify further US sanctions against Myanmar authorities, did not describe the actions as genocide or crimes against humanity.

US officials said use of language that stopped short of genocide was the subject of fierce debate within the administration that delayed the report for nearly a month. United Nations investigators issued a report a month ago accusing Myanmar’s military of acting with “genocidal intent.”

Representative Eliot Engel, the top committee Democrat, said the administration should take action, such as referring the matter to the International Criminal Court. The ICC said earlier this month it had begun an examination of whether the alleged forced deportations of Rohingya could constitute war crimes or crimes against humanity.

Many members of Congress, including President Donald Trump’s fellow Republicans as well as Democrats, have called for a stronger response to the crisis, in which almost 700,000 Rohingya have fled to neighbouring Bangladesh.

A declaration of genocide by the US government could have legal implications of committing Washington to stronger punitive measures against Myanmar. This has made some in the Trump administration wary of issuing such an assessment but pressure from members of Congress, particularly Republicans like Royce, could help influence a decision.

Several lawmakers have also asked the administration to press for the release of Reuters reporters Wa Lone, 32, and Kyaw Soe Oo, 28, who were convicted on Sept. 3 under the colonial-era Official Secrets Act in a case seen as a test of democratic freedoms in Myanmar.

The reporters, who pleaded not guilty, said they were handed papers by police shortly before they were detained, and a police witness testified that they had been set up. They had been investigating the killing of 10 Rohingya men and boys as part of a military response to insurgent attacks.

Separately, two members of the Senate Foreign Relations Committee, ranking Democrat Bob Menendez and Republican Todd Young, asked Secretary of State Mike Pompeo whether he had asked the Office of the Legal Adviser at the State Department for a formal legal determination of genocide.

“We ask that you provide a formal legal determination regarding the actions of the Burmese military to Congress without delay,” they said in a letter seen by Reuters on Thursday. The State Department did not immediately respond to a request for comment on the letter.