Public (dis)interest: Mirror, mirror on the wall, who is the most corrupt of all

Public (dis)interest: Mirror, mirror on the wall, who is the most corrupt of all 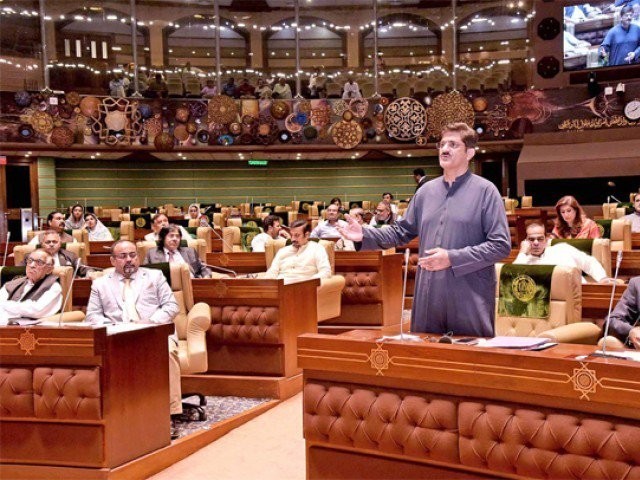 A file photo of a Sindh Assembly session. PHOTO: FILE

KARACHI: You are corrupt!

If you ask members of the Sindh Assembly, everyone who is not on their team is corrupt. The opposition accuses the treasury members of swindling public funds. The treasury, meanwhile, sticks to political rhetoric and point-scoring. Little is spoken about the issues on hand. The budget, which has been the main agenda for the last two days, is almost completely missing from the speeches.

The second day of the post-budget session started at around 11:10am, with only 62 members present in the House.  Throughout the session, lawmakers from the treasury and opposition benches hurled accusations and counter-allegations at each other, ultimately forcing the deputy speaker to adjourn the session till Wednesday (today).

The situation intensified when Pakistan Peoples Party (PPP) MPA Sadia Javed indistinctly lashed out at Pakistan Tehreek-e-Insaf’s Dr Imran Shah. “An honourable member was speaking yesterday about the plight of a poor girl from Umerkot,” she said. “That girl has now arrived in Karachi, but the MPA sahib is not attending their phone.” Javed added that Shah had “tortured a citizen in broad daylight and then paid around Rs3 million to return to this House.”

Referring to the case of PPP candidate Wahida Shah, who was disqualified for torturing polling staff in Tando Mohammad Khan in 2012, Javed said, “He (Imran Shah) is sitting in the House and our members were sent packing for an indefinite time.”

Javed’s remarked seemed to irk the PTI lawmakers, who started protesting. The deputy speaker tried to calm the situation, but to no avail and she ultimately had to adjourn the session.

Earlier, the opposition members termed the budget proposal a jugglery of figures, while the treasury members insisted it was a historic allocation of funds, given the financial constraints.

Grand Democratic Alliance (GDA) MPA Waryam Faqir said that all the ministries, in collaboration with the bureaucracy, were minting money and no office was spared from the menace of corruption. “Dozens of officers are either behind bars or cases are being pursued against them in courts,” he said. “The PPP government, in the last ten years, has looted public resources and built their own properties. I ask them to please shift the money from Dubai to Pakistan,” he remarked. “Sindh is suffering financially because of these ministers and their cronies. We reject this budget because we can’t see any welfare scheme for the poor,” he added.

PTI MPA Omar Omari, quoting figures from the budget document, said, “This is all an eye wash and nothing will happen.” He added that each year, the Sindh government presented excellent figures on paper, but the ground reality was completely different. “Around Rs2 billion were allocated for the MPA Hostel, which was supposed to be built in two years. This fund has now been enhanced to Rs3 billion,” he said, adding that children in Thar were dying of starvation while the government’s members were enjoying a luxurious lifestyle at the cost of public money.

PPP’s Nida Khuhro, who happens to be the daughter of Nisar Ahmed Khuhro, said the opposition members were unhappy and frustrated with the government’s plan to develop the province. “I want to ask what the PTI government has done in KP and what they are doing in the federal government now,” she said, adding that the PTI government was making a new joke every day by taking U-turns on various issues. “For them (PTI), petrol and gas is expensive, but travelling in helicopters seems to be economical,” said Khuhro, adding that the people of Sindh had rejected Imran Khan, which is why he had started taking decisions against the province. Responding to the opposition members’ allegations that the PPP had bungled Rs90 billion in the name of Larkana Development Package, she said, “The PPP government has spent billions of rupees on Larkana and will utilise more funds on it too. The opposition should study before criticising the government.”

PTI lawmaker Khurrum Sher Zaman, in his speech, announced to play the role of mediator between the provincial and federal governments to resolve impending issues surrounding development funds.

Rana Ansar of the Muttahida Qaumi Movement-Pakistan (MQM-P) drew the attention of the House attention toward the rising incidents of street crime in Karachi. “A huge amount is earmarked for law and order every year. I want to ask where this money goes? Where is the safe city project?” she questioned.

The MQM MPA, who hails from Hyderabad, alleged that her city had been ignored by the PPP government over the last ten years. “No scheme is given for it,” she said, adding that the provincial government was abusing its authority, an example of which was the allocation of government vehicles to former MPAs of the ruling party.

PPP’s Shabir Bijarni and Syed Farukh Shah and the Muttahida Majlis-e-Amal’s  Abdul Rashid were among others who took part in the post-budget discussion.