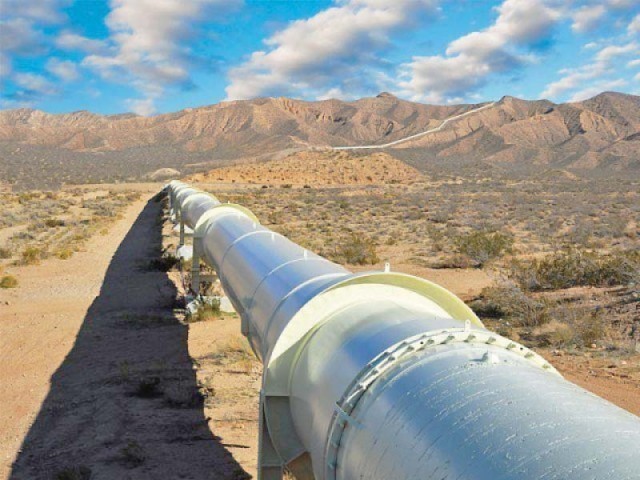 Russia’s energy giant Gazprom would conduct feasibility study on its own expenses to assess economic viability and cost of the project. PHOTO: FILE

ISLAMABAD: In a major breakthrough, Pakistan and Russia are set to sign a $10-billion offshore gas pipeline deal on September 27 in Moscow, a project planned by the latter to capture the energy market of Pakistan.

Sources told The Express Tribune that the cabinet, during the tenure of previous Pakistan Muslim League-Nawaz (PML-N) government, had approved the signing of the gas pipeline deal with Moscow.

Inter State Gas Systems (ISGS) – a state-owned Pakistani company established to handle gas import projects and is already working on schemes like Turkmenistan-Afghanistan-Pakistan-India (Tapi) gas pipeline – has been designated by Pakistan for executing the pipeline project along with Russia’s energy giant Gazprom. A Pakistani delegation will leave for Moscow on Wednesday (today) to sign the multibillion-dollar deal.

Talking to The Express Tribune, ISGS Managing Director Mobin Saulat acknowledged that the agreement would be inked in Moscow on September 27. He revealed that Gazprom would conduct the feasibility study on its own expenses to assess economic viability and cost of the project.

“China-Pakistan Economic Corridor (CPEC) has now entered the industrialisation phase and needs gas for duty and tax-free Special Economic Zones (SEZs),” he said. “The offshore gas pipeline will meet energy needs of industries being set up in the economic zones along CPEC route.”

According to officials, the pipeline will connect Pakistan and Russia and act as an energy corridor between the two countries. “Strategically, it is a very important project as the two countries will come closer to each other,” an official said. “At the same time, Pakistan will gain access to the Russian market in order to boost its overall exports which remained stagnant during five-year tenure of the PML-N government.”

Russia has nominated Public Joint Stock Company Gazprom for implementation of the project. Pakistan’s cabinet has permitted the company to conduct the feasibility study at its own cost and risk.

Separately, ISGS is working on the $10-billion Tapi gas pipeline which will connect South and Central Asia. Construction work on the scheme in Pakistan is planned to start in March 2019.

These projects are termed game changer for Pakistan as they will not only lead to regional connectivity, but will also meet growing energy needs of the country.

Owing to a long-running tussle with Europe and the United States over the annexation of Ukrainian region of Crimea, Russia is looking for alternative markets and wants to capitalise on the increasing energy demand in South Asia.

Russia has been a huge gas exporter to European Union (EU) countries and Turkey since long and despite US anger, Moscow has continued to provide gas to them. Moscow receives gas from Turkmenistan and then exports it to EU states.

Pakistan has been experiencing gas crisis, particularly in winter, for the past many years as domestic production has declined with new additions being offset by depleting old deposits. In a bid to tackle the crisis, the PML-N government started liquefied natural gas (LNG) imports from Qatar under a 15-year agreement and brought supplies from other sources as well.

According to a government official, after signing of the memorandum of understanding (MoU) for the offshore pipeline, work on the feasibility study will begin. Russian gas exports touched an all-time high in 2017. According to Gazprom, gas flow to Europe and Turkey, excluding ex-Soviet states, hit a new daily record of 621.8 million cubic metres.