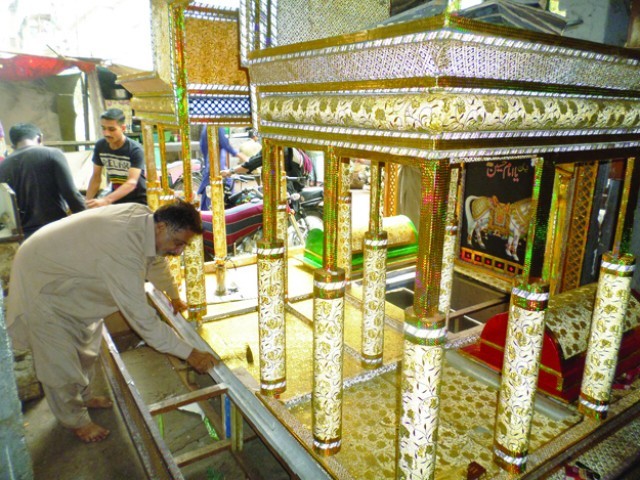 The Hindu community members in Karachi show their respects for Imam Hussain (RA) by adhering to the practices of their elders and engaging in making taziyas which are used in Ashura processions. photos: express

KARACHI:  Ancient temples across the city are home to taziyas that are made with zeal and fervour on the occasion of Ashura. The ancient taziya, famously known as Mai Jannat, is prepared in the courtyard of the 100-year old Mari Mata temple located on Akbar Road in Saddar.

Taziyas are made in memory of Imam Hussain (RA) and symbolize the tomb of Imam Hussain (RA) in Karbala, Iraq. While many religious and cultural traditions are dying out with changing lifestyles and economic hardships, the tradition of taziya continues to defeat the wave of social changes.

The Hindu community members in Karachi show their respects for Imam Hussain (RA) by adhering to the practices of their elders and engaging in making taziyas which are used in Ashura processions.

An area of the Mari Mata temple is specifically reserved for the making of the Mai Jannat taziya while nazr and niyaz of Imam Hussain (RA) are carried out throughout the year. Gond Saleem, the head of the family that makes taziya, explained the history of these unique taziyas. Gond’s father was a Hindu and he practices the same, but his mother, Mehmooda, converted to Islam and it was her devotion that encouraged Gond to carry on the tradition of his family. Mehmooda remained devoted to Imam Hussain (RA) and making of taziyas until her death eight months ago at the age of 80. 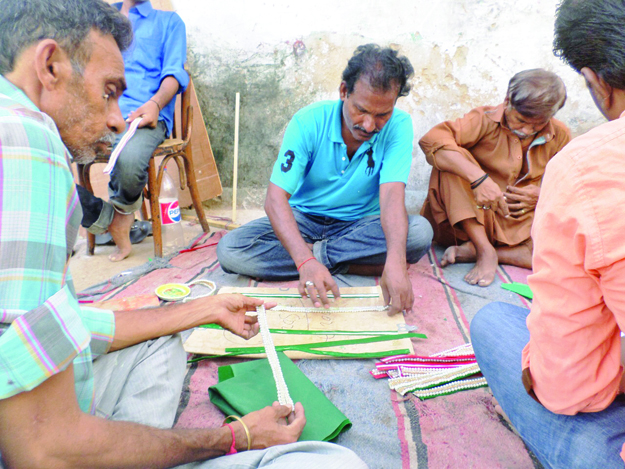 According to Gond, the construction of shops in the area adjoining the temple has limited the space for trees under which taziyas were made for years. This is the reason why taziyas are now made in the courtyard of the temple. The administration of the temple has set up another space for pooja and separated it from the courtyard though a big door. This door is locked during the days preceding Ashura when work on taziya begins.

Women from Gond’s family also participate in the making of the taziya. Gond is a rikshaw driver who discontinues his service as soon as preparations for taziya begin. The total cost for a taziya comes to Rs30-40,000. Gond collects the charity given in nazr and niyaz and spends it on the taziyas. He says that prominent personalities have been visiting to pay respects to the taziya for years.

Another ancient taziya in the city is made by Akhtar Khan, in the Ratan Talao Frere market area, following the tradition of his late father Mehmood Khan. Akhtar is an old man who has been making taziyas for the past 40 years along with his sons. The taziya prepared, according to Akhtar, is 24 feet tall and 10 feet wide; by a continuous labour of 40 nights and at a cost of Rs100,000. The entire cost is covered by Akhtar alone, however, he does not refuse if someone willingly contributes. The taziya is prepared by the 7th Muharram and is taken along the central procession of the Ashura.

The materials used to make the taziya include shiny papers, vaults which have stickers on them and wood for the frame of the taziya. According to Akhtar, the material used in taziya becomes expensive in the month of Muharram. Due to an increase in demand, the prices of shiny paper go up by as much as four times. This results in an increase in the costs. Akhtar said that his father continued making taziyas till his death and he will continue with his father’s legacy.

The youngsters from Hindu community

The youngsters from the Hindu community residing at the backside of civil hospital also prepare a taziya to replicate the Zuljinah (Imam Hussain (RA)’s horse) to express their love and devotion. The taziya is known as Dhun Ji Saeen, which is being prepared by the fourth generation of the family. The Hindu community is deprived of the basic facilities, however a clean space near the temple has been reserved to make the taziya. The taziya is now being prepared by a devotee named Rajesh Badshah who says that the tradition is passed on to him by his ancestors who have been making the taziyas since 1933 at the same place. 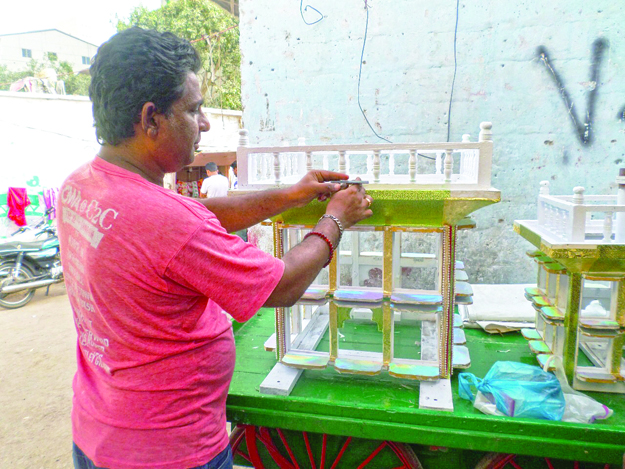 A young man named Raju said that Dhun Ji Saeen was a person who had no children. On the suggestion of one of his Muslim friends, he made a vow (mannat) at the taziya and prayed for a child. Dhun Ji Saeen’s mannat was fulfilled and he was blessed with a child. Ever since then, the devotion of believers continues and scores of Hindus, along with the Muslims, say their prayers and mannats on the taziya. Over 12 young men including minor children take part in high spirits in the completion of the taziya. A barrow to put the taziya on is being prepared and the adornment of the Zuljinah in the inner room is underway. The taziya will be brought in public after completion on 7th Muharram. The youth busy in the preparation of the taziya shared that the taziya keeps them united with the Muslim neighbours and the locals.