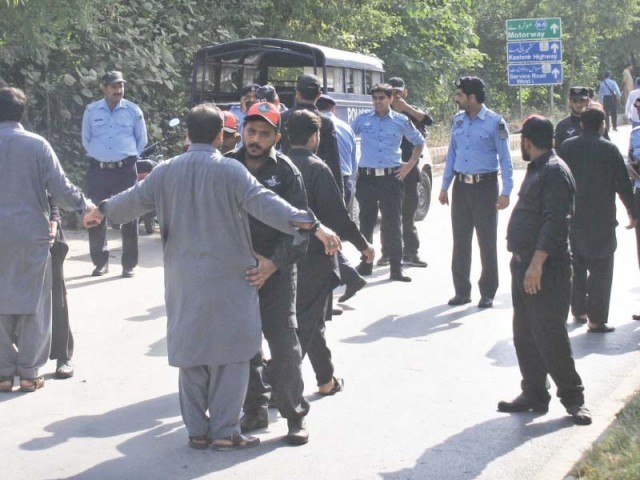 Policemen frisk mourners before allowing them to participate in Muharram 9 carried out from Imambargah Jamia Al-Murtaza in Sector G-9. PHOTO: ONLINE

ISLAMABAD: Authorities have put in place ‘foolproof arrangements’ for the main 9th Muharram procession which will be taken out in Sector G-6 on Thursday.

Around 3,000 policemen in addition to Rangers and Frontier Constabulary troops will be deployed for the procession’s security.

Traditionally the main Ashura procession in Islamabad is taken out on 9th Muharram and on 10th the mourners participate in the main procession in Rawalpindi.

The procession of the mourners will emerge from Markazi Imambargah in Sector G-6/2 and culminate at the same point in the evening after passing through various streets and roads in and around Sector G-6/1 and G-6/2.

One side of the 7th Avenue bordering Sector G-6 will also remain closed from Kulsum Plaza to Aabpara.

The entire Sector G-6/1, around which the procession will go in circle, as well as parts of sectors G-6/2 and G-7/3 will also remain cordoned off. Roads around the Polyclinic as well as the Capital Hospital will also be shut. The roads and streets will remain blocked until the procession is over before midnight.

Residents of Sector G-6/1 have complained that every year they suffer a day-long ‘blockade’ during which they are restricted to their homes.

“If we stay at home we cannot go anywhere until around midnight as all the streets are cordoned off, and if we go out for any daily chore or work we cannot return to our homes until late night,” said a resident.

Another 9th Muharram procession will be taken out in Sector I-10/1 which will start at midnight and culminate at dawn. Several roads in and around Sector I-10/1 will be closed.

Police said fool proof security had been put in place for the processions with huge deployment of police and paramilitary troops along the procession route.

SSP-Operations Najeebur Rehman Bugvi says the procession route will be secured with deployment, barbed wire and concrete blocks. Rangers and FC will assist the police as quick response force while Army troops will be on call.

The SSP said no decision had been made about the suspension of cellular services. He said any such decision will be made according to the situation. “It will be integrated security in three layers. There will be only one entry point at the back of the procession through which the participants will be allowed to enter the procession,” Bugvi said. He added that fire tenders and ambulances will also be deployed along the procession.

Overall 909 majalis (sittings) and 177 processions will be taken out in the capital.

Though the authorities have not announced it yet, mobile phone service is likely to be suspended in the capital on Muharram 9 and 10. The deputy commissioner on Wednesday wrote a letter to the chief commissioner seeking closure of cellular networks from 9am to 9pm for two days. The service will be suspended in sectors G-6, G-7, G-8, G-9, F-7, F-11, I-10 and adjacent areas.