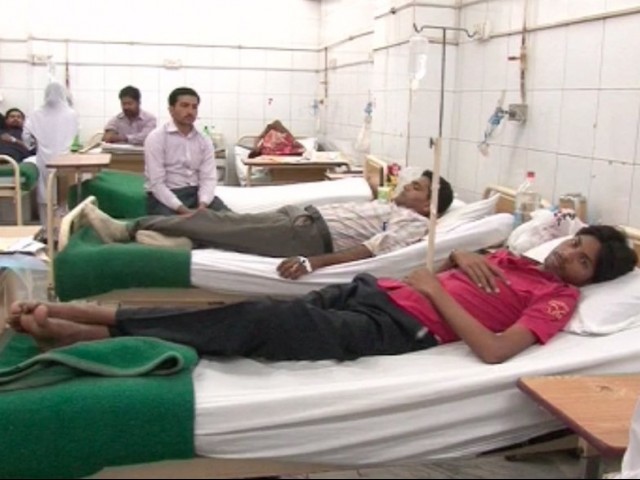 Doctors say 11 other patients being treated at the hospital. PHOTO: FILE

RAHIM YAR KHAN: At least three more people died of jaundice and gastroenteritis while 11 others, suffering from such diseases, were admitted to Sheikh Zayed Hospital over the past 24 hours in Rahim Yar Khan.

The total number of casualties since the outbreak has crossed 95, data collected by Express News revealed.

Health officials at Sheikh Zayed Hospital said that two-year-old Aimen, 67-year-old Surraya Bibi and 50-year-old Karam Bibi were admitted to the health facility in critical condition after suffering from jaundice and gastro. However, their condition continued to deteriorate and they later died at the medical facility.

The bodies of the victims were handed over to their families after legal formalities. Doctors at the health facility said 11other people, infected with gastro and jaundice, were also admitted to the health facility. The patients were identified as 30-year-old Rehana Bibi, 50-year-old Nusrat Bibi, 55-year-old Bashiran Bibi and others.

Jaundice and gastro epidemics hit Rahim Yar Khan earlier in May and resulted in the deaths of more than 95 patients, including children.

Currently, the entire district is plagued by the two diseases. Most government-run hospitals lack adequate facilities and medicines to treat patients.