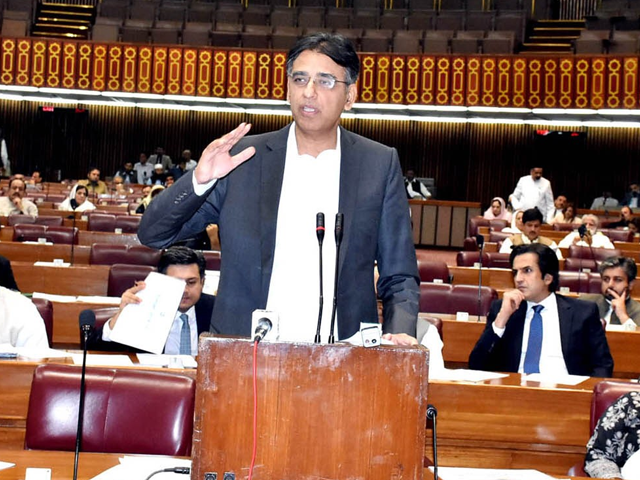 ISLAMABAD: The Pakistan Tehreek-e-Insaf’s (PTI) newly elected government has unveiled Rs5.3 trillion revised budget for this fiscal year but its ‘emergency’ measures lack the ideological shift that is needed to document the growing informal economy and spur economic growth to create jobs.

Presenting the Finance Supplementary (Amendment) Bill 2018 on Tuesday in the National Assembly, Finance Minister Asad Umar claimed that the mini-budget will help the economy teetering on the brink of collapse. He said the PTI government has introduced steep fiscal adjustment of 2.1% of Gross Domestic Product (GDP), which is equal to Rs814 billion.

After his budget speech, the minister said these are only emergency measures and the economic reforms will be introduced in coming weeks. He described “increasing employment, enhancing economic stability and supporting exports” as top priorities of his government.

However, the fiscal and expenditure measures that Umar unveiled do not fully reflect the PTI’s manifesto. He announced withdrawing tax-free perks of governors and federal ministers but could not dare touch the perquisites being availed by judges and generals.

“It was a conscious decision to withdraw only those perks that are enjoyed by politicians who make decisions on the country’s tax policies,” said the minister, while addressing a press conference after his budget speech.

Instead of bringing any new sector or class of people in the tax net, the PTI government has increased the burden on the existing taxpayers. Umar did not scale back non-development expenditures but has cut the development budget, which will pull down the economic growth rate to a level that will not be sufficient to absorb new entrants in the job market.

The regulatory duties have also been increased or levied on 612 tariff lines. The sales tax on RLNG is increased. These fiscal adjustments can help Pakistan secure the International Monetary Fund (IMF) bailout programme, provided it decides to avail it to cope with the “grave external sector challenge”

Asad Umar did not announce new projected annual economic growth target but said it will be significantly lower than the PML-N’s announced target of 6.2%.

However, the Rs661 billion was fully funded from the budget but the Rs725 billion includes Rs150 billion that is not part of the Public Sector Development Programme.

Umar said the mini budget had to be presented as the current budget was highly unrealistic. “The economic conditions can further deteriorate, if no corrective measures are taken. We are going to take big measures that will directly affect Pakistan’s affluent people,” he announced

But the minister supported the PML-N government’s policy of charging higher withholding tax rates for non-filers of income tax returns. He also allowed non-filers to purchase cars and properties, which is a serious setback to the efforts to broaden the documented economy.

Umar also unveiled tax amnesty for about 800,000 people who had been picked for audit due to their failure to file income tax returns. The withholding tax on banking transactions has been increased to 0.6% for the non-filers. The government also increased the tax burden of people earning more than Rs2.4 million annually.

Size of the new budget

The finance minister said the country is facing a severe economic crisis. If no measures were taken the budget deficit could shoot up to 7.2% of GDP or Rs2.9 trillion. This suggests that the budget size could have swelled to Rs6.1 trillion by end of this fiscal year as against Rs5.246 trillion announced by the last PML-N government.

Despite austerity drive, the cost of running the civilian government has been reduced by only Rs3 billion to Rs460 billion. Contrary to increase in current budget, the PTI government has cut the development spending by Rs172 billion or 16.1% to Rs896 billion for this fiscal year.

It has introduced steep cut of Rs225 billion on the PSDP – lowering it from Rs800 billion to only Rs575 billion. But it has increased the other development expenditures by Rs54 billion to Rs234 billion due to its decision to give subsidies to exporters and on urea imports.

However, the government has increased the non-tax revenue target by Rs121 billion to Rs893 billion. The government’s net revenue receipts have been projected at almost original budget target level of Rs3.04 trillion after transfer of Rs2.6 trillion to provinces as their shares in federal taxes.

This has left the government with an overall budget deficit of Rs1.9 trillion or 5.1% of the GDP even after taking Rs286 billion cash surpluses.

The minister said the external sector situation was more serious, warning that the foreign currency reserves were slipping at an alarming rate. The import cover at present is less than two months, to be precise only for seven weeks. Rupee depreciation has hit the common man the most, he added.

“We are at a crossroads and if the corrective measures were not taken the rupee could shed its value to an alarming level,” warned the finance minister. He said the 20% devaluation has already increased the cost of gas, electricity, petroleum products and cooking oil to name a few. “This has set alarm bells ringing,” said Umar while explaining gravity of the challenges at the external front.

He laid stress on pulling the country out of its debt burden and said it is the new government’s top priority. He said the public debt has already touched Rs28.3 trillion, excluding Rs2 trillion that are parked outside the budget.

“Improvement will not come from merely stabilisation measures or going to the IMF but it will come when there is employment, improvement in the agriculture sector and increase in exports.”

“But for everything to take effect, it will take time, and time is something we don’t have. Hence we have to take emergency measures,” he said.

The minister claimed that in order to improve the situation of the agriculture sector, the government has given Rs7 billion subsidy on imported urea in addition to providing gas to the local plants.

He said the Insaf health cards will be issued in Islamabad Capital Territory and defunct tribal areas to give up to Rs540,000 annual health insurance cover to each vulnerable family.

The minister said the prime minister has directed to release Rs4.5 billion for construction of 8,276 housing units for labourers. He said the decision to increase petroleum levy by three fold to Rs30 per litre has also been withdrawn. This will result into Rs110 billion cut in non-tax revenue estimates.