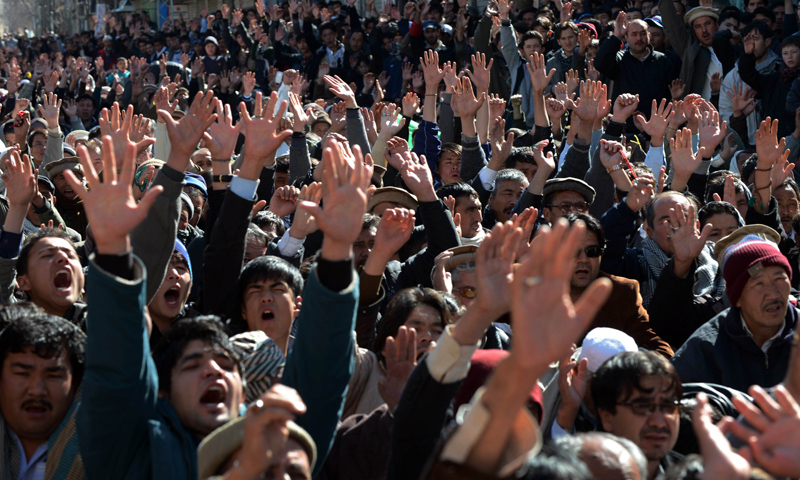 People shout slogans during a protest against the killing of Shia community members in a bombing in Quetta. PHOTO: AFP

Ninety five per cent of sectarian violence all over the world in 2017 was focused on the Shia community, according to a report released by Global Extremism Monitor.

The report was published by Tony Blair Institute for Global Change on Thursday and called on the world to fully engage in a battle of ideas with the extremists on an emergency basis to halt the spread of violence.

According to the study, Pakistan was on a list of countries most affected by violent religious extremism despite lying outside the major conflict zones.

Over 1,489 people were killed by groups that claimed to fight in the name of religion all over the country in 2017, the report revealed. This figure included as many as 247 civilians who were killed in sectarian terrorist attacks in Pakistan in 2017.

Other key findings highlighted in the research underlined that religious extremist groups were fast transforming into transnational actors, which carried out sustained campaigns against the civilian population and weakened state governments.

Global Extremism Monitor observed that sectarianism was the founding ideology of the deadliest and most active terror groups. In addition to these warnings, the authors of the report noted that extremist groups used executions and suicide bombings as a terror tactic and exploited religious doctrines on the nature of war in this regard.

Another important issue mentioned in the document referred to the increasing participation of women in terrorist attacks globally and the terrible continuation of violence in Syria. According to figures released by the international group, more than half of civilian casualties from global terrorism in 2017 were recorded in Syria.

The Monitor also gave a detailed picture of terrorist incidents in 10 of the most violent countries in the world, including Pakistan.

Non-Sunni population under attack in Pakistan

Over 1,489 people were killed in 2017 by groups which claimed to fight in the name of religion in Pakistan, according to Tony Blair Institute for Global Change.

The comprehensive study outlined that terrorists in the country seemed to be working on a two point-agenda, with some extremists seeking to undermine the Pakistani state, while others targeted Shia community and minority groups.

Major terror attacks in Pakistan in 2017

The research detailed that at least 12 terror groups were active in the country over the course of 2017, and seven of them launched terror attacks.

Pakistani media ‘most vibrant’ in Asia, threatened by powerful groups inside country: RSF

The Tehreek-e-Taliban Pakistan (TTP) was the deadliest, and managed to kill 173 people in the year. TTP hit civilians, government figures, media personalities and security forces in a systematic campaign to undermine the state of Pakistan.

According to Global Extremism Monitor, TTP was responsible for a number of attacks on educational institutes in the country throughout the year, and even told the media that the attacks were a response to Pakistan taking action against the families of militants.

Another disturbing trend highlighted in the account was the enhancement of relationship between different terror groups in Pakistan, evidenced by TTP claiming responsibility for an IED explosion, carried out in retaliation for the killing of Asif Chotu, a member of sectarian terror outfit Lashkar-e-Jhangvi (LeJ).

The study claimed that 247 civilians were killed in sectarian violence perpetrated by the terror groups. Around 136 of these causalities were Shia community members, and over 36 per cent of the attacks on civilian targets took place in Balochistan.

Factions of sectarian outfits affiliated with LeJ also pledged allegiance to Islamic State (IS) in 2017, which is expected to further inflame tensions in the region at large, underlined the Monitor.

The report stressed that in addition to these terror groups, there were several local extremist organisations which did not initiate attacks themselves, but were instrumental in providing a platform for larger terror outfits to wreak havoc in the region.

Delving into some detail about LeJ, the Monitor noted that the outfit tended to focus more than half of all violent activity on attacking soft targets, like civilians or government buildings and staff.

LeJ was identified as the third largest perpetrator of attacks against civilians in the world, ahead of Boko Haram in Nigeria and IS in Afghanistan. Besides LeJ, two other groups Jamaatul Ahrar and TTP also launched attacks on the Shia community in the country.

Members of the Ahmadiyya community, a religious minority, were systematically killed in targeted attacks in 2017, the report revealed. Christians were not safe from attacks either, and were also prime targets for terror groups over the year.

Journalists were constantly targeted in the country too, and the Monitor said that multiple assassination attempts were recorded on media professionals during the year.

Besides Pakistan, the other countries identified as a hotbed of extremist activity in the world included Syria, Iraq, Afghanistan, Somalia, Nigeria, Yemen, Egypt, Libya and Mali.

The Monitor used open source data on the use of terror tactics by extremist groups as a basis for the study. The tactics identified in the findings of the report included the use of public space by terrorists to launch attacks in order to spread maximum chaos, as well as the deliberate targeting of prominent personalities and public buildings.

In addition to these, data on suicide bombers and summary executions, especially the rise of the use of female suicide bombers, mostly by Boko Haram in the African region, were also discussed in the report.