Repair costs will be signif­icant if helico­pters are to be brough­t back to a flight-worthy status­
By News Desk
Published: September 13, 2018
Tweet Email 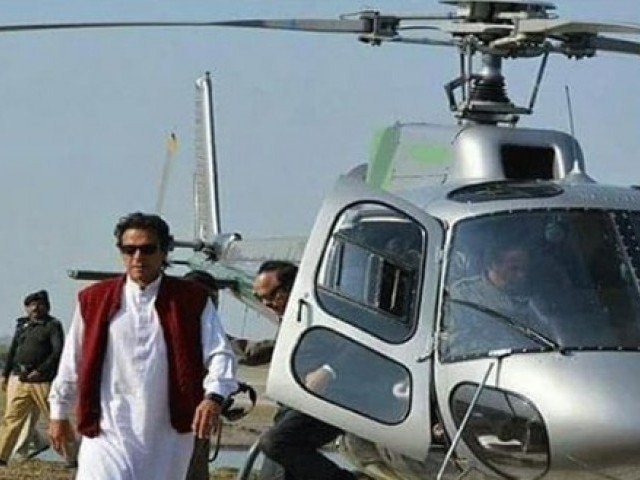 PM Imran comes out of a helicopter with police officials in the foreground. PHOTO: TWITTER/ @FaiqaArshad11

None of the four helicopters to be put up for auction by the Pakistan Tehreek-e-Insaf government as part of their austerity drive are in working condition, BBC Urdu reported.

Previous governments had procured the helicopters from the United States, and all of them are out of order after being kept out of use for an extended time. After Special Advisor to PM Naeemul Haq announced the auction of four helicopters and eight buffaloes in a tweet, the Prime Minister Office directed the cabinet division to initiate preparations for the auction.

Of helicopters and buffaloes: Haque says ‘surplus’ items to be auctioned

The letter written by the PMO contained no information regarding the buffaloes. According to BBC sources, the cabinet division was only entrusted with the auction of helicopters as they were under their competent authority.

According to the report, none of the helicopters are usable. In order to bring them back to flight-worthy status, significant sums of money will be required.

The US had gifted the helicopters to Pakistan for relief and rescue purposes; two UH-1H helicopters arrived between 1971-1974 and the remaining arrived in 1992 and 1993 respectively. In addition to the older ones, Pakistan acquired six more helicopters of newer models in the years prior.

The new stock had alleviated the need for the old helicopters.

Sources of the British broadcaster said that after being suspended from use, the helicopters were parked at heliports for the past many years. According to experts in the cabinet, two of the helicopters may be put to use but the repair cost would amount to millions.

On the other side, overhauling the older two helicopters would be significantly difficult as well as expensive.

The real cost of mobility in Pakistani cities

According to experts, helicopter maintenance is extremely costly as some parts of the aircraft require maintenance whether in use or not.

Acquiring a buyer for the helicopters would be a daunting task given the condition and the obsolete model. Sources reveal that the final fate of the aircraft will be made after a cabinet division briefing to Prime Minister Imran Khan.