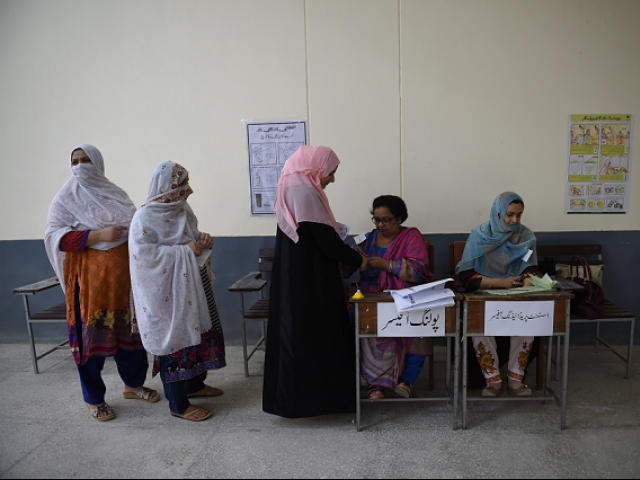 Women line up to vote in the 2018 General Elections. PHOTO:AFP

According to the Election Commission of Pakistan (ECP), women voter turnout in the 2018 general elections stood at 40% with 21 of 46 million registered women voters participating in polling.

There were only two constituencies with less than 10% women voter turnout. In 2013, the number stood at 17. The change was most remarkable in areas like Upper Dir where over 38% of registered women participated in polling, compared to the one woman who came out to cast her vote in 2013.

But does higher turnout by women result in greater representation  across legislatures or in government?

India, for example, achieved electoral gender parity in the 2014 general elections with women voter turnout at 66 and male at 67%. Many studies in India have show polling is the one time where women make decisions independently of family patriarchs.

Despite greater participation, only 11% of the Lok Sabha comprises of women. Less than 10% of candidates fielded by political parties in the 2014 elections were women.

In Pakistan, few seats are allotted to women. Of all candidates in the 2018 elections, only five per cent were women. Of these 171 candidates, eight won seats.

Both countries struggle with patriarchal mindsets and deep-seated misogyny that bar women from making it through the electoral process into higher levels of government. With promises of a ‘Naya Pakistan’ and the move to develop an equitable civil society, we cannot afford to have a situation where many women vote but very few hold the positions that allow them to introduce effective and sustainable change.

“I’m expecting the future government to formulate policies that are more inclusive and promote girls’ education,” Samar Ajmal, a woman from Multan who voted for PTI, said. Millions of women like Ajmal voted for a better future for their families.

The government can respond to these hopes by imparting leadership training to women members of political parties. There is also a need for educational and skill development programmes with a gender perspective, capacity building and raising public awareness. Pakistan also requires renewed laws that combat gender violence and harassment.

According to McKinsey report Gender diversity, a corporate performance driver women make up 50% of the population in South Asia but contribute only 24% of GDP. There are huge gains to be made by investing in gender equity at all levels. Studies undertaken by reputable institutions have shown time and time again that gender- diverse teams perform better.

In other words, the new government needs to implement a more proactive and holistic approach in addressing the gender gap to achieve true democracy. Ensuring women play an equal role in re-shaping the country’s future is crucial. Prosperity is a long shot away if half a nation’s population is alienated.