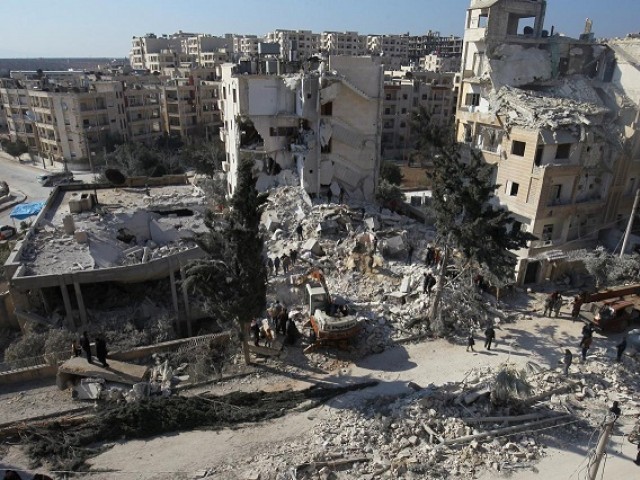 BEIRUT: Hailing from far and wide, they flocked to Syria to wage “holy war”. Now foreign terrorists face a fight to the last to hold onto Idlib, their final bastion.

Syrian troops, backed by Russia and Iran, have massed around the northwestern province ahead of an expected onslaught against the largest militant-held zone left in the country.

Since 2015, Idlib has been home to a complex array of anti-government forces: militants and terrorists with ties to al Qaeda.

The non-Syrians include fighters from Uzbekistan, Chechnya and China’s ethnic Uighur minority who cut their teeth in other wars but then swarmed to Syria to take up the cause.

The threatened assault by President Bashar al-Assad’s government could deprive the few thousand left of their last stronghold in their adopted homeland.

“These are people who cannot be integrated into Syria really, under any circumstances, who have nowhere to go and who may just be ready to die in any case,” says Sam Heller, a senior analyst at the International Crisis Group.

“So they’re a real stumbling block to any solution,” Heller tells AFP.
In a bid to avert an assault, the top three powerbrokers in Syria’s war — Russia, Iran, and Turkey – agreed on Friday to work together on ‘stabilising’ Idlib. But they revealed few details.

A major obstacle to a substantive agreement, observers say, is the fate of terrorists in the province, including foreign militants.

Chased out of their own homelands and targeted in both Afghanistan and Pakistan, experienced foreign terrorists embraced Syria’s war as their own starting around 2013, two years into the conflict.

Many joined the militant Islamic State group but others stuck by al Qaeda and its former Syrian affiliate – which now leads the powerful Hayat Tahrir al-Sham (HTS) alliance dominating Idlib.

One of the largest is the Turkestan Islamic Party (TIP), whose members belong to the ethnic Uighur Muslim minority facing a stifling crackdown in China’s Xinjiang region.

They gained fighting experience in Afghanistan before heading to Syria and helping to oust government troops from Idlib in 2015.

“From there, they raided weapons stocks and ever since have been among the most potent factions in the north, so they’re not a joke,” says Heller.

Their fighters, estimated to number between 1,000 to several thousand, are based around the town of Jisr al-Shughur in Idlib’s southwest, hit in recent days by escalating artillery and rocket fire.

TIP will likely fight hard in an all-out assault, probably as a key battlefield ally for HTS, says Tore Hamming, a specialist on terrorist movements at the European University Institute.

“Not necessarily because of the group’s numbers, but because they have become known as good fighters and they’re really well-respected in the terrorist and militant environment,” he says.

But since the TIP cannot operate in Xinjiang, a potential loss in Idlib would deprive them of one of their major “alternative battlefields”, says Hamming.

The TIP aren’t the only battle-hardened Asians in Idlib – Uzbek fighters have joined a smattering of groups close to HTS.

They honed their skills alongside the Taliban or al Qaeda in Afghanistan, before heading to Syria as allies of al Qaeda’s branch there.

Another is the Imam al-Bukhari Brigade, whose online propaganda often depicts child soldiers and which was designated as a ‘terror’ group by the US this year.

Both are known to have fought in Idlib, but there is little other information available.

Perhaps the most infamous foreign combatants are Chechens, veterans of brutal wars with Russia and linked to HTS.

The two most prominent Chechen groups in Syria are Junud al-Sham and Ajnad al-Kavkaz, but they have kept mum in recent months to avoid picking sides in Idlib’s militant infighting. A government assault could put them back in the limelight.

“Everyone is holding their breath to see what happens,” says Joanna Paraszczuk, who tracks foreign terrorists for the intelligence review IHS Jane’s.

Many travelled to Syria as early as 2012, marrying Syrian women and starting families there, so they are likely to do all they can to protect their new home.

Paraszczuk says that would mean joining battlefield coalitions with larger groups like HTS, and providing snipers and shock troops.
Moscow, in particular, would be keen to make sure any terrorists opposed to it do not make it back to Chechnya to combat its forces.

“Killing them, from that perspective, would be a psychological bonus for Russia,” says Paraszczuk.