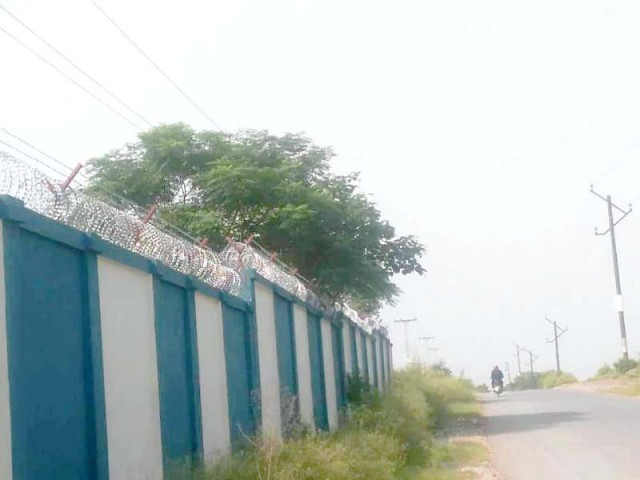 Power lines pass over the boundary wall of a school in Bani Gala. PHOTO: EXPRESS

ISLAMABAD: An eight-year-old boy could soon lose his left hand after he was electrocuted when high-tension power cables fell on him.

While the incident took place in distant Balochistan, the boy is currently under treatment in the federal capital and could be joined by similar victims from the city with at least two schools — where hundreds of children study — are located directly under such high-tension cables.

Residents of Bani Gala, parents of students enrolled in the schools and officials of the Federal Directorate of Education (FDE) have all complained to the power utility on multiple occasions but to little avail.

Power lines pass can be seen passing over the Islamabad Model School for Girls (IMSG) in Lakhwal, furrowing through trees near the school. The electricity cables pose a danger to those studying in the school below, especially during a shower.

“Electric lines are openly touching trees, which is dangerous for the community,” said an education official while requesting anonymity.

“Similarly, the main power line is also touching trees in IMSG Lakhwal which poses a great risk to students”, the official added, pointing out that burnt tree branches can be seen where the lines pass over the girls school.

While the power lines run parallel to the main road, it is neglected by the electric utility, the official lamented.

Locals say that an electricity pylon located just 50 metres from both the schools is leaking current and poses a threat to children.

Disciplinary action should be taken against those who are responsible for such criminal negligence, the officials maintained.

FDE officials, while referring to a similar incident which took place in Karachi where both arms of eight-year-old Muhammad Umer had to be amputated after a high-tension wire fell on him outside his home on the third day of Eidul Azha, have raised the matter before the local office of the capital’s power utility.

However, it has yet to move the power company into taking any action. Residents of Bani Gala have also complained about the poor management of power distribution in the area.

“It [power supply] is always down for many hours after rains,” local resident Arif Abbasi said.

“Just yesterday, there was no power in the area 1am early in the morning and the sub-divisional officer’s (SDO) mobile phone was switched off,” he complained.

Instead of improving supply lines and making it safe they shut down the power supply during rains to avoid any mishap, the resident said.

He urged that the exact names and locations of the schools should be sent to the concerned officials so that they can move the power lines to an area where it does not endanger lives.