It is the highes­t number of reject­ed votes in the past decade­
By Rana Yasif
Published: September 7, 2018
Tweet Email 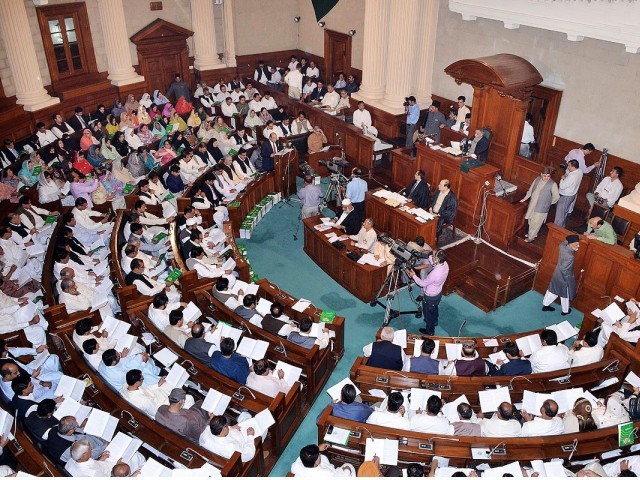 LAHORE: The legislators of Pakistan Muslim League Nawaz (PML-N) not only caused humiliation to their party but also brought a bad name to the Punjab Assembly by beating the record of accumulative rejected votes for the presidential elections in the past decade.

The ratio of the rejected votes gave credence to the belief that there was what many believed a ‘forward bloc’ in PML-N. It has also raised a debate that how these legislators could be loyal to the common people who were ‘disloyal’ to their own parties despite the fact they reached the assembly using PML-N’s platform.

On the other hand, Balochistan Assembly, which is the country’s smallest assembly, had not even a single rejected vote in the last decade.

On the election of former president Asif Ali Zardari in 2008, there were total 10 MPAs of different political parties in Punjab Assembly whose votes were rejected. While not even a single vote was rejected in Balochistan Assembly. Similarly, during presidential election of PML-N’s Mamnoon Hussain held in 2013, the ratio of rejected votes in PA stood at six.

During the presidential election of PTI’s nominee Dr Arif Alvi, the number of rejected votes surged to 18. However, Balochistan Assembly also maintained its tradition of not wasting even a single vote.

A PML-N’s insider said they demanded to unmask those who favoured Pervez Elahi in speaker’s election and now they favoured indirectly Dr Alvi through their rejected votes but the party leadership seemed reluctant to take action against them on the plea that this was not the right time.

The insider said they were not expecting the rejection of votes this time in the presidential election but those MPAs repeated the same episode. When asked why the party’s leadership was not ready to unmask them, or to take action against them, or to expel them from party, the insider said some MPAs had put strong demand for not sitting in parliamentary meetings until those MPAs were unmasked but the leadership perhaps wanted to run a secret operation and did not want to open cards.

“No doubt the rejection of votes not only humiliated the party but also tarnished the image of Punjab Assembly”. The insider said people are asking them how those legislators could participate in process of the legislation who even did not know how to vote.

While PTI claimed it was the way of PML-N’s legislator to record their protest through ballot papers by wasting their votes especially those legislators who were annoyed with the party’s decision for fielding PML-N’s backed candidate Maulana Fazalur Rehman for the presidential election. PTI legislators said they had given training to their legislators to aware them how to cast vote and that was why there was no chance of rejection of votes of their legislators.

Expressing their gloom over the rejection of votes, they said the ratio of rejected votes really has raised a question mark on the legislators and it brought a bad name to Punjab Assembly.