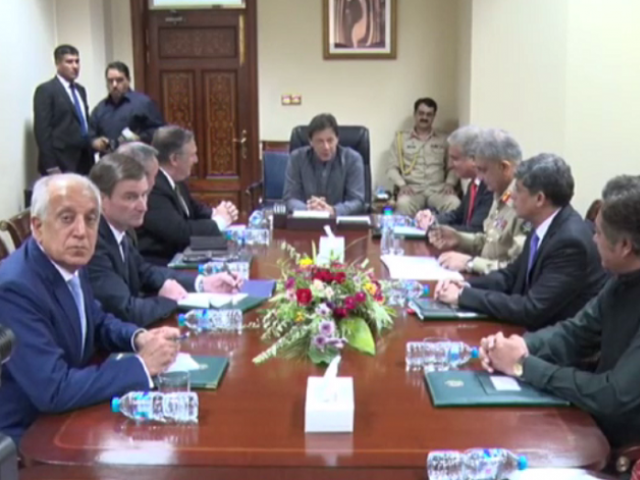 PM Imran Khan refuses to give in to every demand by Washington; COAS also attends meeting. SCREENGRAB

US Secretary of State Mike Pompeo and Prime Minister Imran Khan discussed Afghan peace process and blockage of $300 million in Coalition Support Fund (CSF) among other matters of mutual interest during a meeting in Islamabad on Wednesday.

Pompeo, who along with US Joint Chief of Staff Chairman General Joseph Dunford had arrived on an official visit to Pakistan earlier in the day, was accompanied by other senior officials during the meeting, Express News quoted sources as saying. Chief of Army Staff (COAS) General Qamar Javed Bajwa also attended the meeting, they added.

The US secretary of state later left for New Delhi for another key visit. He had arrived in Pakistan earlier on Wednesday for talks with top government functionaries against a backdrop of fraying bilateral ties.

Discussions on bilateral, regional and international issues take place between Pakistan and the US. FM Qureshi underscores the need to reset bilateral ties on basis of mutual trust and respect. Safeguarding Pakistan’s national interests will remain supreme priority. pic.twitter.com/WhINcNRbZT

Details of Pompeo’s visit have largely been kept under wraps. Official sources, however, did confirm a scheduled meeting with the prime minister.

Pakistan, US break the ice as secretary of state calls up COAS

The US secretary of state said on Tuesday he was hoping to reset ties with Pakistan ahead of the trip. He also announced that Zalmay Khalilzad, a high-profile former US ambassador,would lead peace efforts in Afghanistan.

Pompeo’s conciliatory remarks toward the South Asian state come days after Washington confirmed plans to cancel $300 million in military aid over Islamabad’s lack of “decisive actions” in support of American strategy in the region.

US Secretary of State arrives in Pakistan pic.twitter.com/UDxl8LiM8e

“So first stop – Pakistan. New leader there, wanted to get out there at the beginning of his time in an effort to reset the relationship between the two countries,” he said.

“There are lot of challenges between our two nations for sure but we’re hopeful that with the new leadership that we can find common ground and we can begin to work on some of our shared problems together,” added Pompeo.

“Look, I think there is a new government this time, most of this took place long before the prime minister was in power and I hope we can turn the page and begin to make progress. But there are real expectations,” he said.

“I’m hopeful we can convince them to provide that assistance,” he continued, adding that in his conversations with Imran, they had agreed that peace in Afghanistan was a “shared goal.” Pompeo also held out the possibility the military aid could be restored under the right circumstances.

“We were providing these resources when it made sense for the United States because the partnership was in a place where the actions of our two countries made sense to do that,” he said. “If that arises again, I’m confident we’ll present to the president the rationale for that.”

Earlier last week, FM Qureshi avoided a knee-jerk reaction to the Pentagon suspension of the Coalition Support Fund. He said the  amount was not aid, but a reimbursements of expenses incurred in the fight against terrorism. The minister also said that US-Pak communication was nearing complete breakdown during the last government’s tenure.