Pakistan, US break the ice as secretary of state calls up COAS to discuss Afghan peace

Pakistan, US break the ice as secretary of state calls up COAS to discuss Afghan peace 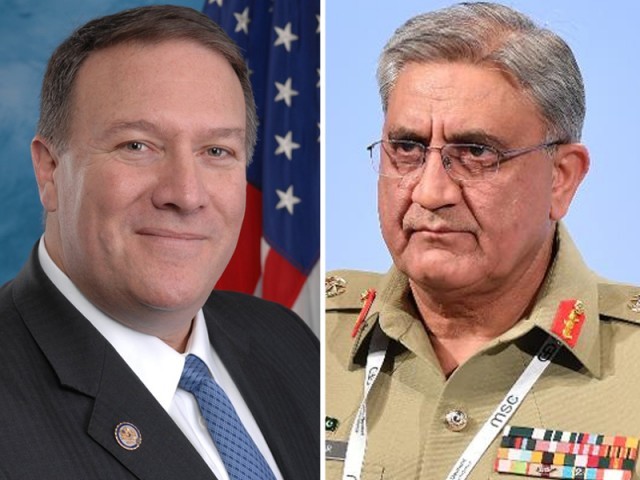 ISLAMABAD: US Secretary of State Mike Pompeo and army chief General Qamar Javed Bajwa discussed the need for political reconciliation in Afghanistan as President Ashraf Ghani announced a ceasefire with the Taliban, officials said on Thursday.

Pompeo, who was the head of CIA before his appointment as secretary of state, telephoned the army chief on Thursday and according to the State Department discussed “advancing US-Pakistani relations, the need for political reconciliation in Afghanistan and the importance of targeting all militant and terrorist groups in South Asia without any distinction.”

.@SecPompeo also spoke today w/ #Pakistan Chief of Army Staff Qamar Bajwa. They discussed advancing U.S.-Pakistani relations, the need for political reconciliation in #Afghanistan, and the importance of targeting all militant and terrorist groups in South Asia w/o distinction.

This was the first interaction between the new secretary of state and the army chief which came amid deterioration in ties between the two estranged allies.

Only last month, the two countries had imposed tit-for-tat travel restrictions on each other’s diplomats suggesting a new low in their troubled ties.

Pakistan, US not going to war, claims Trump close aide

At the heart of the controversy are the differences between the two sides on how to put an end to the lingering conflict in Afghanistan.

Despite Pakistan’s multiple operations in the tribal areas against militant groups, the US is still not convinced that Islamabad has taken out all outfits, particularly the Haqqani Network which is responsible for most deadly attacks on US-led forces in Afghanistan.

Nevertheless, the two countries are looking for a common ground on Afghanistan. A senior US general in Afghanistan recently revealed that talks were held between Kabul and the Afghan Taliban.

Observers believe such talks were not possible without Pakistan’s facilitation because it has critical role in the Afghan peace talks.

The understanding between Pompeo and Gen Bajwa on the need for political reconciliation in Afghanistan coincided with by President Ghani’s announcement of a ceasefire with the Taliban till June 20.

Pakistan-US relations depend on revision of Trump’s do-more policy: sources

The Afghan president, however, made it clear that fighting against other militant groups such Islamic State would continue.

“We are grieved at the loss of precious innocent lives in this barbaric act of terrorism. We express our heartfelt sympathies and condolences to the bereaved families and pray for the early recovery of the injured,” said Dr Muhammad while speaking at a weekly news briefing.

He reiterated Pakistan’s unequivocal condemnation of terrorism in all its forms and manifestations and expressed solidarity with the people and government of Afghanistan in this hour of grief and sorrow.

Meanwhile, the spokesperson said Pakistan would continue to press the World Bank for setting up the Court of Arbitration on Kishanganga and Ratle hydroelectric projects.

“There is no doubt that it is World Bank’s responsibility to empanel the Court of Arbitration, as envisaged in the Indus Waters Treaty.  Pakistan would, however, continue to agitate this issue with the Bank,” the spokesperson said.

He was reacting to reports that the World Bank asked Pakistan to withdraw its plea for setting up a ‘Court of Arbitration’ and accept India’s proposal to appoint a neutral expert on the issue of Kishanganga and Ratle hydroelectric projects.

“For Pakistan, water is its jugular vein, as we are largely an agro-based economy,” Dr Faisal stressed.