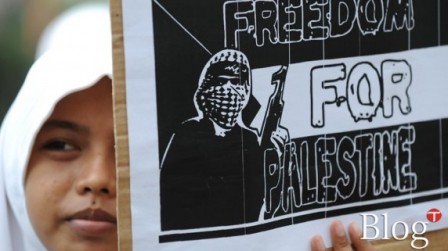 In a vicious attack, defying all humane obligations, Israeli naval forces attacked a flotilla heading Gaza-wards with its 10,000 tonnes supplies of humanitarian aid. The Israeli commandoes descended on the boats while they were still in the international waters, killing some 19 personnel, unarmed and declaredly sailing to Gaza solely for humanitarian activities. With yet again another pre-emptive and disproportionate retaliation, Israel continues the now-three-year-long siege of the region, severely disrupting daily life and resulting in many acute problems for the residents.

Back in 2006, when a Hamas-led government was elected by the Palestinians, it was a golden opportunity for the international community to bring the organization into the fold of legal recognition. Not only would it have persuaded Hamas to give up its militant outfit gradually, it’d also have assured the Palestinians that their plight is heard and realized, democratically. But what we witnessed was sheer hypocrisy both from the West and Israel who refused to recognize the democratic position of the party and nudged away from the possibility of accepting it as the elected representative of the people of Gaza.

Aside from the sheer arrogance of this policy, it was also a huge strategic mistake. Not only did it lend currency to Hamas’ militant tactics and efforts, it also garnered them even more mass popularity in the region which is not surprising given that the Palestinians were explicitly told by the international community that there only choices were either to elect the pro-Israel camp or else, take the course they had long followed – Intifada.

Now that the siege of Gaza makes three years, the circumstances are even worse. The Israeli blockade of all movement into and out of Gaza, termed inhuman by many nations and international organizations, continues unabated. The siege has caused severe problems for the residents of Gaza including acute shortages of food and other daily-use items. The international community seems to be gradually realizing the rigidity of Israel in denying all human rights to the inhabitants of Gaza. In fact, the attack on Gaza strip in 2008 only re-asserted it, with HR organizations accusing Israel of having used phosphorous bombs during the attack. This policy of pre-emptive and disproportionate retaliation has incurred huge loss of human lives, including innocent children.

The United States, however, still seems unwilling to push the limits with Israel, taking a soft approach to any atrocity that has been committed by the state thus far. In fact, analysts are anticipating the nature of a meeting scheduled this week between the Israeli PM and Barrack Obama, the US President. It remains to be seen what exactly would be the repercussions for Israel after such a bold attempt on a neutral convoy comprising many notable personalities. It is also interesting to note here that the agenda of the meeting is actually to discuss the peace process in Middle East. Needless to say, the recent attack has immediately compromised all credibility on the part of Israel and clearly tells how willing it is to pursue the peace process.

Also, Turkey has come all out against the attack and has clearly registered its retaliation internationally. Israel needs to realize that such acts will only serve to isolate it in the international community and if it does indeed look to a better future of mutual co-existence and peace, it needs to consider the plight of the Palestinians. Their basic right – that of representation by whomsoever they vote for – must be recognized.

The alternate path shall surely lead to militarization of the region and further war-mongering.

On a side-note, we must not forget that the Palestine issue also has serious connotations for the Muslim world. The issue has been popularly used by religious zealots to fan religious militarism and gather followers around the stage of political Islam and has been an active ingredient in rousing them for violent Jihad. This underscores the urgent need for a resolution to the Palestine issue in order to overhaul the Muslim world, and take it out of the degeneracy of extremism and fanaticism that currently grips it.

Salman Latif is interested in intellectual discourse towards everything that crosses his mind. He maintains a blog at ‘Tis My Say and actively tweets.This article was originally published at Pak Tea House.