Talks held in a ‘constr­uctive framew­ork’ to resume dialog­ue after three years.
Published: May 31, 2011
Tweet Email 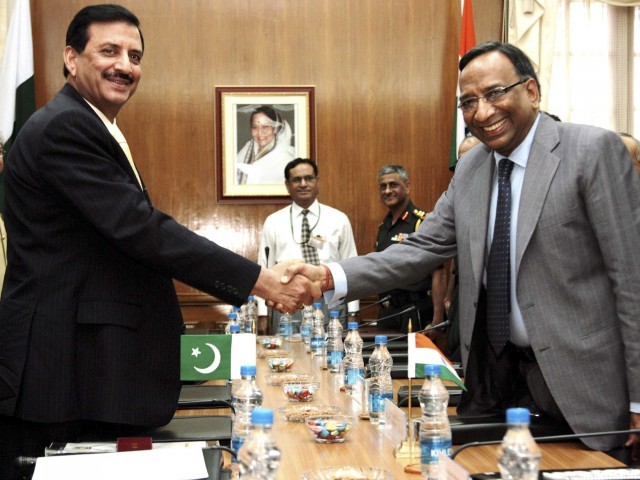 Amiable talks but little movement forward was the result of the first day of talks between India and Pakistan about demilitarisation of Siachen, a mountainous region where borderline is not demarcated, in a “constructive framework”, picking up the threads of the issue after a gap of three years.

Defence secretaries from both countries began two days of closed-door talks in New Delhi on Monday on withdrawing forces from the mountainous no-man’s land above the Siachen glacier in disputed Himalayan territory , where they have faced off since 1984.

“The talks were held in a constructive framework. Both sides apprised each other of their perception about the Siachen issue and also discussed the surrounding issues,” Defence Ministry officials said, The Hindu reported.

The decision to take the dialogue process forward between the two countries was taken last year during the meeting of Prime Minister Manmohan Singh and his Pakistani counterpart Yousaf Raza Gilani in Thimpu.

The Pakistani Defence Secretary met Defence Minister A K Antony in the afternoon for over 20 minutes. The two sides may come up with a joint statement tomorrow after the talks, the officials said.

“The AGPL is not clearly marked beyond the grid reference point of NJ—9842. The two countries have decided to demilitarise the Siachen Glacier, but the matter is stuck as there are apprehensions on both sides,” officials said.

India wants Pakistan to authenticate the AGPL, both on the maps and the ground, as it occupies most of the dominating posts on the Saltoro Ridge, they said. Pakistan, in turn, has been insisting on maintaining the pre-1972 troop positions as agreed in the Simla Agreement.

During the talks, the two sides are also expected to take up the issue of the existing ceasefire along the Line of Control (LoC) and the AGPL, sources said.

Both countries have long accepted the need to demilitarise Siachen, located as high as 20,000 feet (6,000 metres) above sea level, and military experts say the inhospitable climate and avalanche-prone terrain has claimed more lives than gunfire.

“Success could be measured in various terms but I would say the real barometer would be any progress over Siachen,” a senior Indian government official said on condition of anonymity because of the sensitivity of the discussions.

Ogra proposes to cut oil prices by Rs5.87 a litre