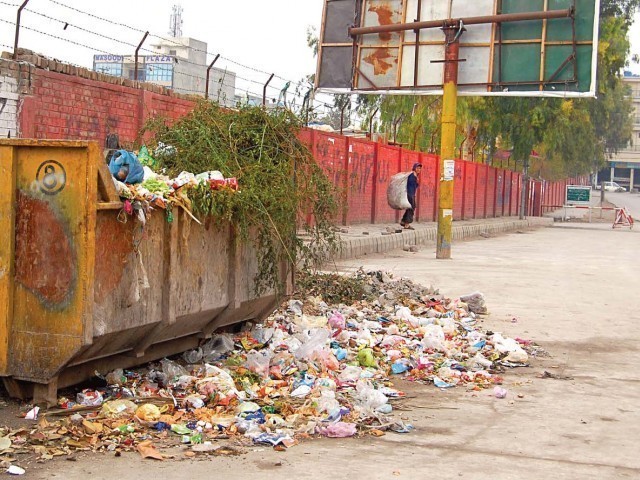 ISLAMABAD: The city’s waste-bins, due to civic authorities’ inability to collect garbage in time, are becoming breeding places for mosquitos and also forcing the citizens to suffer a bothersome odour, potentially creating health hazards. These over-stuffed dumpsters, with rubbish pouring out, are becoming breeding grounds for diseases and call for immediate measures to rectify the situation.

Poly Clinic’s Dr Sharif Astori said trash in monsoon season should be lifted daily as rain water makes the waste generated smell and invites bacteria to grow which could affect the human respiratory system. “The foul smell pollutes the air that spreads respiratory and skin related diseases among residents of surrounding areas,” Astori added. The Spokesperson termed it a bad example of sanitation rules which did not only affect human health but also affected animals. “When the animals dig out that rubbish, it spreads bacteria and viruses in a locality,” he added.

Another Health Expert Qasim Raza said asthma patients were more prone to the foul smell produced by these over-flowing garbage dumpsters. It also wreaked havoc with the public moods, he added. People, who had to bear its smell all the day, might have more aggressive behaviour, Qasim claimed. He explained that the bins mostly contained food waste. Its initial breakdown and subsequent decomposition by the micro-organisms both created an unpleasant smell. Muhammad Ismail, a government employee in sector I-9 called for placing these waste-containers outside the localities and practice of placing it before homes, shops, schools and playing grounds must be discouraged.

No mechanism to destroy medical waste at Sindh’s hospitals

Azam Baloch from G-6 said he has been perturbed by the dumpster, placed in front of his home. “These waste-bins must be placed out of residential areas as they eventually affect the health of the residents in a locality,” he added. “We are forced to keep our doors and windows shut to avoid this uninvited adversity,” he said. He urged the authorities concerned that if they could not put these uncovered bins outside the localities, they take precautionary measures and apply insecticide or lime-powder on these over-stuffed dumpsters.

Meanwhile, Islamabad Metropolitan Corporation (IMC) Director Sanitation Sardar Khan Zimri said that the Corporation was taking different measures to keep the city clean by fully utilising resources at its disposal. He said the administration was also planning to outsource trash-picking to a private company for further streamlining the cleaning process.

Despite heaps of garbage across city, solid waste budget slashed

Additionally, the Corporation was working out different options to recycle the garbage and utilise it for a constructive purpose like energy generation and making organic fertilizers. The Director informed that the IMC was in the process of consultation with different entities, for the waste disposal without impacting the environment and general health. The outsourcing scheme was already operational in the Sector F series as pilot project that had given positive results, he added.